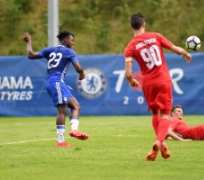 Chelsea completed their pre-season trip to Austria with an 8-0 hammering of local side Atus Ferlach before jetting off to the US.

Belgian striker Michy Batshuayi scored his first goals for the Blues in the win as Antonio Conte continues to get used to life with his new side.

The forward, who signed during his exploits at Euro 2016, scored twice after the break to help Chelsea to the emphatic victory.

Former Barcelona forward Pedro also netted a second-half brace, while Loic Remy scored a hat-trick as he bids to force his way into Conte’s thinking. Boss: Conte got another look at his players

Mastermind: The Italian is looking to restore Chelsea to Europe’s top table

The Frenchman scored twice before half-time before completing his treble after the break.

Unlikely scorer John Obi Mikel got the other goal for the Blues who now fly to the States to take part in the International Champions Cup. READ MORE

They will play Liverpool on July 28 in California, before taking on Real Madrid in Michigan two days later.

AC Milan will provide the opposition on August 4 in Minneapolis. Recovery: Zouma has revealed when he thinks he will be back

Surprise: Zouma is happy by how quickly his injury is healing

One man who won’t be involved in those fixtures is Kurt Zouma, although the defender has revealed he is progressing better than he had thought, and expects to be ready for action in six to eight weeks.

“I’ve been working alone for a while and now I’m training, learning and improving with the guys. I didn’t know I would be back on the training pitch by now, I thought it would be a bit later,” Zouma told www.chelseafc.com.

“My knee is okay and I don’t have any pain, which is great. I’m not fit enough yet but hopefully in six weeks or a couple of months I will be, we will have to wait and see.”