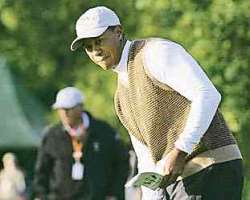 Tiger Woods doing his thing
Tiger Woods's 258-week reign as world number one could be ended by fellow American Phil Mickelson on Sunday.

Woods, who recently returned to golf after a break of five months following revelations about extra-marital affairs, missed the cut as a professional for only the sixth time at last week's Quail Hollow Championship in North Carolina.

Mickelson (9.66 average points) can heap more woe on the 14-times major winner and top the rankings if he triumphs at this week's Players Championship in Florida and Woods (11.17) finishes outside the top five in the tournament dubbed the 'fifth major'.

'The Players is a really big event,' Mickelson told reporters on Sunday. 'It's one we all would like to play well and fortunately my game is really close.

'Some adjustments here or there and hopefully I should be able to get in contention again next Sunday.'

Mickelson was second at Quail Hollow, four shots behind Rory McIlroy who fired a course record 10-under 62 on his way to becoming the youngest winner on the PGA Tour since Woods in 1996.

The Briton, who turns 21 on Tuesday, blew away the rest of the field with a shotmaking masterclass that lifted him to ninth in the rankings, a jump of four places.

'I shot 16-under on the weekend around a golf course like this,' McIlroy said. 'You can't get much more of a confidence boost than that but I've still got a long way to go.'