Conte psyches Italy, demands everything from players against Germany 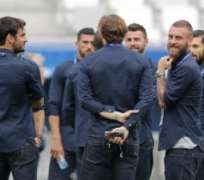 Italy coach Antonio Conte has called on his players to do something ”super-extraordinary” by beating Germany in the quarterfinals of the European Championship on Saturday.

Italy arrived in France with an aging team that had faced plenty of criticism back home. But it won Group E with a match to spare and beat two-time defending champion Spain 2-0 in the round of 16.

Next up is fierce foe Germany, which is seeking to add the European Championship crown to the World Cup it won in Brazil two years ago.

”At the beginning we had little credibility among everyone, both in the media at home and also abroad,” Conte said Friday. ”Everyone knew that it’s a dark moment for Italian football talent. But I think we are showing that with hard work, with organization, with 23 great lads who work hard, who sacrifice themselves, we are trying to overcome obstacles that at the beginning seemed insurmountable.

”Now we have someone in front of us who is at a really high level … against Spain we did something extraordinary, tomorrow we need to do something super extraordinary because it will be a really tough test. But these are the matches which make you feel great.”

Germany has never beaten Italy in a competitive match, with the Azzurri winning semifinals in 2006 – on their way to the World Cup triumph – and at Euro 2012.

However, Germany humiliated Italy 4-1 in a friendly in Munich in March.

Italy will likely be without key midfielder Daniele de Rossi, who is a doubt with a thigh injury.

Conte is already missing midfielder Antonio Candreva because of injury, while Claudio Marchisio, Marco Verratti and Riccardo Montolivo were ruled out before the start of the tournament.

”We’re not going to give anything away,” he said. ”But we know that these are matches where you have to be 120 percent to play in them because they’re very, very physical matches, intense matches. Matches in which you don’t need to be almost fit – you need to be very fit.”