ELECTION 2010: THE VIEW FROM SPEAKERS’ CORNER 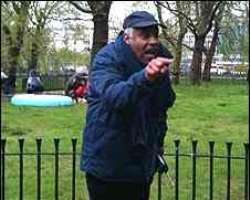 By Brian Wheeler
Political reporter, BBC News
“Why don't we just ask God, through you, who is going to win and save us the bother of voting?”

“Well, I don't know,” replies Patrick confidently, “but God does. And what the Bible says is that God raises up and brings down governments and kings, so in this issue God already has sovereign power.”

It certainly makes a change from “I agree with Nick”.

But then Speakers' Corner is about as far away from the tightly-controlled spin and soundbites of the televised prime ministerial debates as it is possible to get.

Free thinkers, radicals and eccentrics have been gathering in this windswept corner of Hyde Park, in the shadow of Marble Arch, since 1872 to set the world to rights and have a good row.

Where else, in the space of hour, could you hear a black man enthusiastically singing the praises of the British National Party and be angrily denounced as a “Marxist traitor who should be hung” because you work for the BBC?

That is all to come, however, and as I tentatively approach the paved area where the speakers set up their soap boxes every Sunday, I begin to fear I have made a terrible mistake.

The driving rain seems to have had a drastic effect on turnout.

Going round in circles
The only speaker I can find, a middle-aged black man called Patrick, who is standing on some aluminium step ladders, is engaged in an interminable debate about the omniscience, or otherwise, of God.

The small crowd of die-hards huddled under umbrellas all seem to know each other and poke gentle fun at Patrick, who becomes increasingly animated in his defence of God's “sovereign power”. But the debate just seems to go round in circles.

How long has it been going on for?
“About 35 years,” deadpans a regular.
If it is the same every week, why does he still bother to come here?


The rain put off all but the hardiest regulars
“This is the one place where you will hear views you don't hear in the media. According to the media, if you read the Sun you vote Tory, if you read The Guardian you vote Liberal Democrat. People here don't fit into those neat little boxes. It is a genuine free debate.

“Where else can you do it? If you talk to people on the tube they think you are mad.”

He does not rate my chances of hearing much debate about the general election, however.

“It is all Christians and Muslims now. Ten or 15 years ago there was far more political debate. The Socialist Party of Great Britain come down here still. He is a very good speaker, but he is not here today.”

'White people'
Things are looking up though. Someone has asked Patrick who he is going to vote for on Thursday. They are more than a little surprised by his answer.

“I have considered voting for the BNP. I phoned up the BNP. I have talked to them.”

This causes an outbreak of incredulity in the crowd – but Patrick is adamant that the Labour government is guilty of discrimination against white people.

Someone is keen to steer things back to God's omniscience: “Why did God allow Gordon Brown to become prime minister in the first place?”

Patrick looks to the heavens, momentarily lost for words. A smile plays about his lips.

“Well that is what I ask Him, week in week out, day in day out, and I haven't got answer for you yet because I think it's totally mad.

“Some people say God has put this country under judgement because we are wicked and judgement includes the wickedness of the Labour Party.”

'Marxist traitors'
On the other side of the paved area, another speaker is taking a more benign view, although he does not seem to have attracted many listeners.

“These are good times,” he says when I ask him about the general election.

“The British electorate at this time have an excellent variety of choices. There is almost too much choice. When you go to a restaurant and all the dishes are good you have a problem. It is better than being in a country where only one man is king, like a dictatorship.”

Will Forrow, who until family reasons forced him to step down in February was the UK Independence Party's Parliamentary candidate in Newton Abbott, is in a more combative mood, as he sets up his soap box.

He has travelled up from Devon for the day, to make the case for Britain getting out of the European Union, and he marshals his facts and figures with the ease of a practiced political operator.

“What about the BBC licence fee?,” shouts an angry young man in the crowd.

Mr Forrow looks a little sheepish, as I have just introduced myself as a representative of the Corporation.

“I still think the BBC provides a unique service throughout the world,” he says diplomatically.

“What, propaganda?” splutters Mr Angry, who describes himself as a “libertarian”. He has really got in for the corporation.

“They are Marxist traitors. They should be hung, the lot of them,” he says of BBC employees like myself.

The debate has really kicked off now, with people of all ages and races chiming in with their views on globalisation, capitalism, immigration and whether UKIP are “Little Englanders”.

There is a heated exchange about the recent closure of the Corus steel works, on Teesside, as I decide to take my leave and head back to the tube station.

Mr Forrow, still on his soap box, hands me a card. He seems pleased to have made the journey.