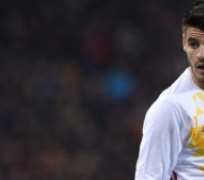 Alvaro Morata has been linked with a move to the Premier League this summer, and that move could be coming sooner than expected.

Originally believed to be a top target for Arsenal and Manchester United, Antonio Conte has now pushed Chelsea into the race.

Multiple reports out of England and Spain state the Blues would like to sign Morata before he starts play with the Spanish national team at EURO 2016. Spain's first match of the tournament is on June 13.

Morata scored 27 goals over the past two seasons with Juventus, helping the club to consecutive Serie A titles. His play earned him a spot with Spain's first team, set to make his major tournament debut later this month.

Still just 23-years-old, Morata would be a great addition to a Chelsea side that desperately needs support up top. Chelsea boss Antonio Conte was the one who wanted to bring Morata from Real Madrid to Juventus in 2014, although Conte stepped down just days before the signing was made official.

The one problem that Chelsea could run into is the involvement of Real Madrid. When Morata moved from Madrid to Juve two years ago, Real retained a buy-back clause in the deal for around $33 million. With so much interest in Morata this summer, Real is expected to trigger that buy-back clause and then try to resell him for a figure closer to $60 million.