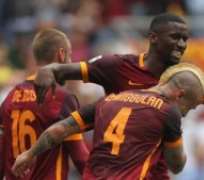 This one comes from Matt Hughes of The Times , and leads with the ominous prospect of Chelsea looking at Christian Benteke as a potential summer signing.  Going from Costa to Lukaku to Benteke seems like a massive downgrade, so let’s hope that’s just some scaremongering of the highest order from whoever it benefits to be doing such things.  (Maybe Liverpool who would probably bite your hand off if you offered them £20m?)

So that’s not all that interesting.  The interesting bit is at the very end and it goes a little something like this:

Conte wants to sign five new players this summer, with most of them expected to follow him from Italy.

-source:  The Times
Hughes then goes on to specify a few names, most of whom we’ve heard before.  So perhaps he’s just putting two and two together and getting five out of it (literally).  Or he’s working with some new bit of information.

Two of the other names on The Times’ list are part of the aforementioned Roma bunch.  Manolas is a quality defender with whom we were linked last summer, too.  And of course the Nainggolan thing has dragged on for a couple months already and we look no closer to signing him than before.  The Times also mentions Juventus’s Lichsteiner, but not only was that rumor  poorly sourced in the first place, it’s already been denied by better sourced follow-up rumors.  Lastly, there’s Inter Milan’s goalkeeper Samir Handanovic who’s supposedly our go-to candidate should Thibaut Courtois leave.  Courtois of course said, again, that he’s staying 100% just a few days ago and I doubt anything’s changed in that regard so quickly.

So there’s not much to get excited about here.  There are no Bonuccis or Koulibalys or Marquinhoses or Griezmanns or even Moratas here.  Nainggolan would be a quality get (especially if the Pogba rumors turn out to be BS, as they are likely to do), but other than that, we’re hopefully focusing our attentions on better options than above average Serie A players.  (And if that’s the best we can do, then we need to switch gears to unearthing the next undervalued gem, or just focusing on youth and building from within.)

We Ain’t Got No History