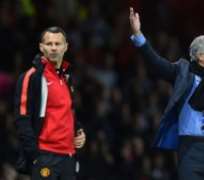 Yet, the hierarchy at Man United thought it wise to ( reportedly ) offer the iconic Welshman a reduced role under new Man United manager Jose Mourinho — or, at the very least, allow Mourinho to do so?

Having spent the last 29 years of his life at the club (963 appearances) — from youth academy beginning in 1985(!!!), to first-team player in 1990, to first-team player-manager (2013-14) and eventually assistant manager from the 2014-15 season onward — Giggs has had a hand in the only club he's ever known winning 24 major trophies over the last three decades, so you'll have to excuse the 42-year-old if he feels somewhat disrespected over the whole ordeal.

Especially when he surely held hopes of landing the club's top job himself.

With that, Giggs is set to walk away from Old Trafford this summer, presumably in hopes of landing a first-team managerial job elsewhere. Just five months ago, Giggs was linked to the then-vacant manager's post at Swansea City , in his native Wales, but the club ultimately opted to hire the more experienced Francesco Guidolin instead.

Mourinho is expected to name 40-year-old Rui Faria, who has accompanied his compatriot at each of his last six career stops (Uniao Leiria, Porto, Chelsea, Inter Milan, Real Madrid and Chelsea again), as his no. 2 once again.