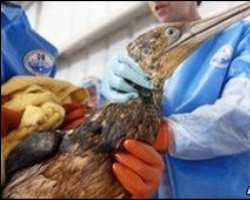 US President Barack Obama is due to arrive in Louisiana to see for himself the devastation caused by a sprawling oil slick in the Gulf of Mexico.

He will hold crisis talks with officials from five affected US states to discuss how to tackle the disaster.

Louisiana Governor Bobby Jindal warned earlier that the spill – caused by the sinking of an oil rig – was threatening the “way of life” in his state.

A senior US official said it could take three months to contain the leak.

“You're looking at potentially 90 days before you ultimately get to what is the ultimate solution here and that's a relief well,” Interior Secretary Ken Salazar told NBC's “Meet the Press.”

Hopes are that such a relief well – which is already being drilled by British Petroleum – would divert the flow of oil from a ruptured well about 50 miles (80km) off Louisiana's coast.

Some 1.6m gallons (six million litres) of oil have spilled since the blast, the US Coast Guard says.

The well is spewing about 5,000 barrels of oil a day, according to some estimates. But officials admit that it is nearly impossible to be sure how much is leaking.

Forecasters said there would be no let-up on Sunday of the strong winds that have been pushing the oil towards the Louisiana shore.

The BBC's Andy Gallacher, who is in the area, describes two-metre high waves rolling in.

Warning to BP
In Louisiana, Mr Obama will be briefed by federal and state officials on what urgent steps need to be taken to tackle the disaster.

Mississippi, Alabama, Louisiana and Florida have all declared a state of emergency. Attorneys general from these states will also meet to discuss legal options, as pressure mounts on BP.

Mr Obama has already warned the British energy giant that it will be held ultimately responsible.

On Saturday, Gov Jindal told a news conference: “This oil spill threatens not only our wetlands and our fisheries, but also our way of life.”

He also said he had still not received detailed plans from the firm on how it would stop the spill.

As the sheen from the slick began washing up on the shore, the governor said “BP will need to fund these plans” to protect coastal communities.

The energy giant's chief executive, Tony Hayward, is also expected in Louisiana on Sunday. The company has said it will honour legitimate claims for damages.

Andrew Gowers, from BP, told the BBC they had a flotilla of 76 boats trying to contain the spill, as well as a million feet of booms and five planes spraying oil dispersants.

'Largest mop-up ever'
There have been warnings that within weeks the spill could eclipse the 1989 Exxon Valdez disaster as the worst in US history.

The Louisiana wetlands host a multi-billion-dollar fishing industry and is a prime spawning area for fish, shrimp, crabs and oysters.

As rescue centres took in seabirds coated in oil, environmental groups warned the impact would be felt for a long time.

One Louisiana resident told the BBC the disaster was more serious than Katrina, the hurricane which devastated the region in 2005.

“This is worse than Katrina, much worse,” he said. “Because it'll take years and years to fix this.”

BP has sent six robot submersibles to try to activate a blowout preventer that could turn off the oil supply, so far without success.