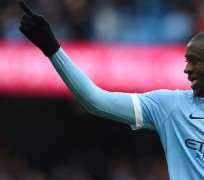 Manchester City's Yaya Touré has rejected offers of £30m from each of the Chinese clubs, Shanghai SIPG and Jiangsu Suning, with the Ivorian also not interested in joining Internazionale, who continue to monitor him.

The midfielder's first choice is to continue playing in the Premier League and he is open to staying at Manchester City. Touré has one year remaining on terms worth £220,000 a week with incentives.

Pep Guardiola takes over on 1 July and, despite the Spaniard countenancing his sale to City from Barcelona six years ago, Touré has no issues with him.

Despite turning 33 last month, the midfielder believes he can continue at the highest level for the foreseeable future. His elder brother, Kolo, is 35 and played regularly for Liverpool last season, including starting the Europa League final this month.

This has furthered Touré's determination to extend his career for as long as possible.