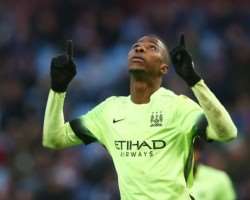 The news comes a week after Chelsea teenager Dominic Solanke was reported to have demanded £50,000 per week from the London club. Solanke, 18, could be left out in the cold at Stamford Bridge if he refuses to lower his expectations, however. Iheanacho's advisers, according to the Daily Mirror , believe he should be on the same amount as Raheem Sterling, his fellow City team-mate.