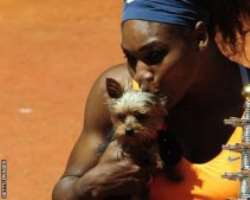 Serena Williams made herself ill after eating dog food hours before reaching the last eight of the Italian Open.

The world number one tried “a spoonful” of food meant for her dog, Chip, before beating fellow American Christina McHale in straight sets in Rome.

“Fast forward two hours, I just ran to the toilet like I thought I was going to pass out. It did taste weird. It tasted kind of like house cleaner.”

In a video posted on Snapchat, Williams explained she sampled a dish of chicken and rice offered on a ‘doggy menu’ at her hotel.

“I force-swallowed it, said the 34-year-old American. “I don’t know what they put in these dog foods, but Chip liked it.

“I don’t think it’s consumable for humans. They should have wrote that! So now I feel really sick. It was just a spoonful, but I don’t feel so good.”

Williams defeated McHale 7-6 (9-7) 6-1 and set up a meeting with Svetlana Kuznetsova, who beat fellow Russian Daria Gavrilova, in the last eight.

Elsewhere, British number one Johanna Konta was beaten in three sets by Misaki Doi in the third round.

Doi, ranked 45 in the world, belied her position 22 places below the Australian Open semi-finalist to take victory.

Despite her defeat, Konta will arrive at the French Open as a seeded player. A year on from being ranked 143rd in the world, she is up to 23.

“I thought she played a very, very good level today and I didn’t do quite enough to get her out of her comfort zone,” Konta told BBC Sport.