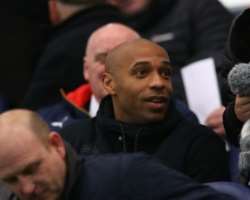 Arsenal legend Thierry Henry is reportedly set for a promotion in the club’s coaching set up. The Gunners’ all-time leading goalscorer has been coaching various age groups as part of his Uefa badges and is now being eyed for a role with the club’s under-18s.

Although no agreement has yet been signed, Henry has reportedly impressed the staff at Arsenal with his commitment to coaching and his attention to detail on the training field. The situation is, however, somewhat complicated by his punditry role with Sky Sports.

Accepting a more senior role at the Arsenal training ground is seen by some within the club as the Frenchman’s first major step towards becoming the manager of the first-team, according to the Daily Mail . It has been reported, too, that current head of academy Andries Jonker is set to leave the club, while Jan van Loon could also soon depart as under-16s coach.

Meanwhile, Arsenal are reportedly keen to retain the services of club captain Mikel Arteta as a coach. The Spaniard is said to be wanted by Manchester City also, but Arsenal are willing to offer him a coaching role in their set-up at the end of the season.