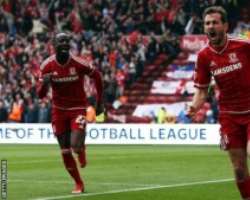 Middlesbrough ended their seven-year Premier League absence by drawing a tense and nervy Championship promotion decider against Brighton & Hove Albion at the Riverside.

Both sides began the game knowing that victory would see them join champions Burnley in the top flight next season, though a draw was enough for Boro to pip the Seagulls to second place on goal difference.

Cristhian Stuani’s goal, from Gaston Ramirez’s superb free-kick and David Nugent’s touch across, put the hosts on their way in the first half.

Another free-kick led to Dale Stephens’ equaliser, heading across goal at the back post after Brighton had begun the second period in full flow.

But Stephens was then dismissed for a foul on Ramirez – and Boro made the man advantage count to retain the scoreline for the rest of the game, including eight minutes of added time.

The point worth £170m
There was no end-of-season sunshine for the packed crowd at the Riverside, as a chilly, murky day greeted the two teams at kick-off – thank goodness then for the red-hot atmosphere in the ground.

Boro struck through Stuani and then soaked up Brighton’s attempts and threatened on the break, with Uruguay international Ramirez hugely influential before he was withdrawn on a stretcher with a serious-looking leg injury.

Stuani, a compatriot of the Southampton loanee, could have had a hat-trick but saw a half-volley deflected over the top and then wasted a fine chance.

The Seagulls showed glimpses of their threat in the opening 45 minutes but playmaker Beram Kayal was kept quiet and their forward line was well marshalled, in particular by Daniel Ayala.

The visitors emerged with more potency after the break and Stephens’ header gave them hope, before the midfielder was then sent off for a fierce tackle on Ramirez just four minutes later.

Boro lacked composure without their playmaker and Brighton, desperate for a goal, created spells of pressure but again Ayala, Ben Gibson and George Friend made big interventions.

Albert Adomah struck his point-blank shot at David Stockdale as Boro sought the goal to make sure, but it did not matter in the end as the whistle blew to spark scenes of celebration and relief at the end of a sapping, absorbing game.

Gibson’s gamble pays off
The decision by chairman Steve Gibson to invest in playing staff for head coach Aitor Karanka was justified as two of the imports he helped finance came to the fore in Stuani and Ramirez.

It was Gibson’s intervention 30 years ago that scraped the club off the canvas with extinction looming and his name was sung lustily by supporters before and during the game.

He oversaw the 2004 League Cup win at Cardiff and the run to the Uefa Cup final two years later, but few afternoons at the Riverside will have been as significant as this one.

Premier League money, a minimum of £170m, will prove hugely beneficial to a club that have faced tough economic times in their transition to the Championship.

What next for Albion?
Brighton will now face Sheffield Wednesday in the play-offs, with the first leg at Hillsborough on Friday, 13 May

It was always going to be tough to turn up and win on Teesside, where only Bristol City and Nottingham Forest had triumphed in the league this season.

However, Brighton still have another chance against Sheffield Wednesday in the play-offs – albeit without Stephens, who will serve a suspension for his red card.

The Seagulls, like their opponents, know the misery of play-off defeat well having been dumped out by rivals Crystal Palace three seasons ago, and then again by Derby the following season.

It will need to be third time lucky if they are to end their 33-year exile from the top flight.