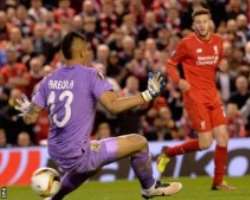 Jurgen Klopp remains on course for silverware in his first season in charge after Liverpool beat Villarreal to reach the Europa League final.

Trailing 1-0 from the first leg, Liverpool levelled the tie on aggregate after Bruno Soriano’s early own goal.

Daniel Sturridge, left out of the team in Spain, then put the hosts in command with a low finish after good work from the excellent Roberto Firmino.

After Villarreal’s Victor Ruiz was sent off, Adam Lallana made the win safe.

Relive Liverpool’s win over Villarreal
Ruiz received a second booking after stepping on Lallana’s foot in a game where Liverpool’s energetic pressing ruffled their opponents.

Klopp, who took over from Brendan Rodgers in October and celebrated wildly with supporters after the final whistle, has now taken the Reds to a second final of the season, following defeat by Manchester City in the League Cup final.

They will face Europa League holders Sevilla in Basel on 18 May, after they beat Shakhtar Donetsk 3-1 to win their semi-final 5-3 on aggregate.

Despite sitting nine points and 19 goals behind fourth-placed Manchester City in the Premier League, Liverpool would qualify for next season’s Champions League should they win in Switzerland, representing a fine return for Klopp in such a short spell in charge.

Anfield enjoys another sparkling European night
On another memorable night at Anfield, Liverpool reached their first European final since losing the 2007 Champions League to AC Milan.

While it was less dramatic than the quarter-final win over Klopp’s former team Borussia Dortmund, the players seemed galvanised by an electric rendition of ‘You’ll Never Walk Alone’ before kick-off as home fans paid tribute to those who died in the Hillsborough disaster, following last week’s inquest verdict where 96 fans were found to be unlawfully killed.

The early opener came after Nathaniel Clyne crossed to the back post and Firmino put it back into the danger area. Sturridge missed the ball, but Bruno nudged into his own net.

Boosted by the goal, the hosts pressed Villarreal to distraction with James Milner, Philippe Coutinho and Lallana indefatigable in midfield.

Added to the poise offered by the returning Emre Can, who has been out injured for the past three weeks, and the trickery of Firmino, the visitors could not cope.

Sturridge, who has finally been able to enjoy a run of games after a shocking injury record, scored what appeared to be his most important Liverpool goal to put Klopp’s side ahead in the tie.

Lallana then sparked more renditions of Liverpool’s famous anthem when he tucked in from close range after more enterprise from Firmino.