Eden Hazard is back and it showed versus Spurs 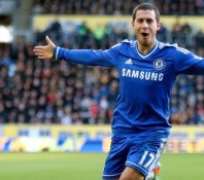 Tottenham Hotspur drew 2-2 with Chelsea at Stamford Bridge on Monday as their hopes of winning the Premier League title were ended.

Spurs looked to be on the brink of their first league win at Chelsea since 1990 as they scored twice just before half time through Harry Kane and Son Heung-min and were cruising.

There were multiple flashpoints in a feisty London derby and Mauricio Pochettino 's men couldn't hold on with Gary Cahill pulling on back and Eden Hazard smashing in an unstoppable strike late on to send the home fans wild.

Here's what we learned from a wild night at Stamford Bridge.

SPURS CAN'T KEEP TITLE HOPES ALIVE
Tottenham did not give up without a fight but they threw away a chance to keep the title fight going until the penultimate weekend of the season.

Pochettino's side started slowly but after Son and Danny Rose went close, they grew in stature and then the goals arrived. In the 35th minute Kane was played in by a wonderfully simplistic pass from Erik Lamela and Kane showed supreme composure to round Asmir Begovic and tap home. One minute before half time it got better as Christian Eriksen teed up Son to smash home. 2-0. Spurs' fans were in dreamland.

Even at the start of the second half they pushed hard with Kane getting free on the left and having his curled effort saved. He then flashed a cross across goal which evaded his teammates and Spurs were on top. Chelsea pulled a goal back through Gary Cahill just before the hour mark to liven up a spicy encounter further and then Chelsea pinned Spurs back for the remainder of the game. Willian 's cross just evaded Diego Costa at the back post as Kyle Walker cleared and then Hazard delivered the killer blow.

Spurs have had a sensational season but they crumbled at Chelsea and have now not won at Stamford Bridge for 27 years. Losing the battle in this manner was the most upsetting for Spurs and their fans.

PASSION BOILS OVER; DEMBELE IN TROUBLE
Right on half time, with Spurs leading 2-0, Danny Rose clattered into Willian in front of the benches. All hell broke loose. Pochettino raced onto the pitch to try and break up the scuffle, players from both teams bundled in and the coaches got involved. It was utter pandemonium as the thrusting passion of a truly vitriolic London derby was in full flow. Amid all that madness a moment of sheer lunacy arose.

Tottenham's Mousa Dembele had already been at it with John Obi Mikel earlier in the game and, of course, Costa had been going at it with Jan Vertonghen and just about anybody else who wanted a piece. So, Dembele and Costa came together, squared up among the crowd and then the Belgian gouged Costa's left eyeball with his right finger. Just what was he thinking? Referee Mark Clattenberg missed it but one of his linesman was looking straight at the incident, I mean straight at it, and didn't tell the referee to act. Dembele will likely be getting a call from the English Football Association this week and can expect a ban for the rest of the season. There is no place for this kind of  behavior. What to follow was almost worse.

There were so many contentious incidents during this game and Clattenberg tried to be lenient and let tackles go to start with, but in the end he dished out 12 yellow cards. Eric Dier flew into tackles against Hazard and Fabregas and how he stayed on the pitch we will never know. At the end of the game it all kicked off again. Coaches, players and officials were involved in a huge brawl at the headed down the tunnel. Severe FA punishment for both clubs, mostly Tottenham, will follow.

Spurs threw away their chance to win the title and they reacted in the worse possible way. It was shambolic the way they ended the game. If it passion, pride and commitement you're after, look no further than this London derby. It was a belter but is likely to see repercussions, especially for Dembele and probably many others.

Hazard came on at half time with Chelsea 2-0 down and helped changed the game. His incisive running scared Spurs' defense every time he got on the ball and his sublime curling finish in the 83rd minute made it 2-2 and hammered the final nail in the coffin of Spurs' title hopes. He hasn't had the best season, far from it, but he gave the Chelsea fans what they wanted on Monday. To  end Tottenham's title hopes. See the video above to watch it play out. The home fans were desperate to beat or draw with Spurs and were cheering “Leicester, Champions!” in the final moments and one fan held up a sign for their former manager, and current Leicester boss, Claudio Ranieri : “Let's do it for Ranieri!”

They did. Fans in Leicester rejoiced as Hazard celebrated in front of Tottenham's fans following his goal. Last week he spoke of how Chelsea did not want Tottenham to win the league and do whatever they could to stop it happening. Turns out he did it himself. Hazard won the PL for a team for the second-straight season.NBC Sports