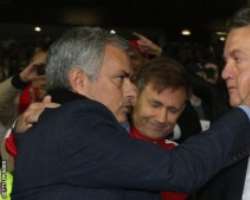 United will announce Mourinho as their next manager within the next two weeks after he signed a deal to replace Louis van Gaal.

The club had hoped to wait until the end of the season to make an announcement.

But they have been forced to bring it forward after news of Mourinho's signing the contract leaked out in his native Portugal.

United bosses reckon Mourinho is the only boss in world football who can take on Pep Guardiola, who will take charge of neighbours Manchester City.

And Starsport understand Old Trafford top brass have promised Mourinho a massive war chest of up to £300m to rebuild the team.

That could include Zlatan Ibrahimovic, who is open to a move to United but doesn’t want to play under Van Gaal.

United are struggling to secure a top four finish this season and executive vice chairman Ed Woodward wants Mourinho to create a side capable of challenging for major trophies.

As well as Ibrahimovic, Neymar, Edinson Cavani, Thomas Muller, Paul Pogba and Raphael Varane could be all be targeted.

Van Gaal ploughed through more than £250m himself since replacing David Moyes in 2014 but many of his signings flopped.