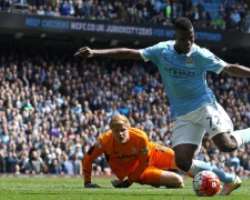 Manchester City moved up to third in the Premier League with a routine win over Stoke ahead of Tuesday’s Champions League semi-final with Real Madrid.

Fernando headed the hosts in front from a corner before a Sergio Aguero penalty – awarded for Ryan Shawcross’s foul on Kelechi Iheanacho – doubled the lead.

Iheanacho, 19, added the third from close range, then the teenager rounded the keeper to seal an emphatic win.

Yet his side go into one of the biggest games in the club’s history with confidence high after moving above Arsenal, who play at Sunderland on Sunday, in the table.

Manchester City’s place at the top of table of European football next season is by no means certain but, a slow start notwithstanding, they showed their ruthless side to dispose of a Stoke team that missed several good chances.

Such was their dominance, Pellegrini could afford the luxury of bringing off influential players David Silva and Sergio Aguero to rest legs for the heavyweight meeting with Real, who lost striker Karim Benzema to injury in their match at Rayo Vallecano on Saturday. Will Iheanacho play against Real?

The biggest roar of the game came five minutes from time, when Iheanacho was announced as man of the match.

Just as neighbours United have an exciting young forward in Marcus Rashford, so do Manchester City in the shape of the young Nigeria international, who has had a hand in 11 goals (seven goals, four assists) in eight competitive starts in 2015/16.

After Fernando had risen above Geoff Cameron to glance home the opening goal from a corner, Iheanacho won the penalty that Aguero promptly dispatched before scoring twice himself in the space of 10 second-half minutes.

Kelechi Iheanacho had nine touches in the Stoke penalty area, scoring twice and winning a penalty, compared to just two touches inside the home team’s penalty area by Stoke forward Joselu, who was guilty of one glaring miss.

His first, to make it 3-0, was a cool finish from Pablo Zabaleta’s clever run and pass, while Iheanacho showed maturity beyond his years to round substitute keeper Jakob Haugaard and slot home after being sent clear by substitute Wilfried Bony.

He now has 11 goals in 30 senior outings for City and is turning into a real prospect. Real Madrid will offer different level of test to Stoke City but Iheanacho’s pace off the bench could be a useful weapon for Pellegrini. What now for Stoke?

Mark Hughes’ side started well, missed several chances at 2-0 down, and eventually caved in. They have now conceded 12 goals in three games.

Their task was not helped by the absence of Ibrahim Afellay, the Netherlands midfielder who suffered a serious knee injury on the eve of the game.

The Potters, whose hopes of a top-10 finish are diminishing after one win in seven games, were also forced to replace 40-year-old keeper Shay Given at the start of the second half due to a suspected groin injury.

Joselu squandered a great opportunity to reduce the deficit at 2-0, while Mame Biram Diouf went close with a header before City took the game out of sight.

Stoke still have to face Sunderland (home), Crystal Palace (away) and West Ham United (home) and manager Hughes faces a battle to rouse his players and ensure the season does not end on a flat note. Man of the Match – Kelechi Iheanacho (Man City)

Kelechi Iheanacho has scored 11 goals from 15 shots on target in all competitions this season. He proved a real handful once again, his pace and power causing Stoke all sorts of problems. Took both goals well, particularly his second. A terrific prospect. What they said

Manchester City manager Manuel Pellegrini: “A big team must always be focused on both competitions. Premier League and Champions League. Every big team must do it every year.

“Stoke is fighting for nothing but nobody wants to lose games. It was important to score the first goal.”

On Kelechi Iheanacho: “He is an important young player with a lot of future. He scores lots of goals but he is not just a penalty-box player. I am sure that his role in this team will be very important.

Stoke manager Mark Hughes: “Once again we have conceded poor goals, which is a recurring theme.

“We were a million miles away from where we need to be in the first half. We are lacking the pace and power you need in key areas of the field.

“I’m not one to look at injuries but we have got guys coming back from long-term injuries and playing through injuries. It’s difficult. We have issues but we should help ourselves.” Man City 4-0 Stoke: We need to get back on track – Mark Hughes

Stoke midfielder Glenn Whelan: “We are going through a difficult stage – we are feeling sorry for ourselves. This is not the Stoke City I am used to playing with and we owe more to our fans.

“We don’t want the season to fizzle out. We have three games to turn it around. Listen, we need to look at ourselves. It hasn’t been good enough. We are giving away soft goals.” The stats you need to know

Attention now turns to Tuesday’s Champions League semi-final with Real Madrid for Manchester City, whose next Premier League game is at Southampton on 1 May.

Stoke will attempt to arrest their losing run at home to struggling Sunderland next Saturday.