That CNN’s Video of Chibok Girls 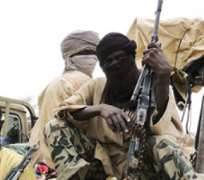 International broadcaster, CNN certainly wowed its global audience with the video it exclusively obtained of Nigeria’s abducted schoolgirls that were abducted my Boko Haram terrorists on April 14, 2014 to the consternation of the entire world. As would be expected in any situation where one has expended resources to acquire such valuable media, the news organisation milked it for all it was worth and had the foresight to have arranged a screening for grieving parents of the stolen girls. If the footage of distraught mothers grovelling as they pleaded for the release of the children didn’t force the hands of the government to go in search of the girls then maybe nothing will. Perhaps, that CNN’s exclusive will finally force the Nigerian authorities to seek closure in this case.

As heart breaking as those images are they raise questions that all those involved should provide answers to if the misery of these little girls is not to be released to mere movie prop that matters only to the point of boosting viewership and growing ratings.

For a start, how come, as usual, none of the indigenous media houses were smart or daring enough to obtain the video? Of course the argument would be made later that they are lazy and without initiative and the enterprise needed to nail such an exclusive.

The video was shot sometimes around last Christmas from the analysis provided by CNN, how long has the network held unto the video? Why did it opt for now, the second anniversary of the abduction, before airing it? Would it have been better if the video had gone public as soon as it was obtained with the possibility that any potential rescue was sped up relative to that timeframe? There is the fact that there are editorial processes that must be followed before the video is used but was the delay part of a deal struck with the terrorists as a condition for this ‘exclusive’ scoop?

Protection of sources is a non-negotiable requirement of journalism. This requirement is serious enough that many journalists across the world have rather served prison terms than expose their sources while media organisations would rather bear the cost of expensive litigations than divulge sources. But what is the ethics about withholding information that mean that 219 girls will continue to remain sex slaves with potentials that some of them could get killed in these days of final onslaught on Boko Haram? Is CNN willing to assist the Nigerian authorities by providing information that could lead to the rescue of the girls?

A natural argument is that the CNN should not compromise ethical standards to assist Nigeria’s law enforcement. Does anyone recall how jail breaking Mexican drug kingpin, Joaquin "El Chapo" Guzman was recaptured? Guzman’s recapture was “thanks to a secret meeting with U.S. actor Sean Penn,” according to an article on Al-Jazeera America’s website. The incentive to capture El Chapo was high considering that he was at the root of the epidemic of heroin addiction in the US so ethics or any other consideration would be out the window naturally.

Even the ethics of healthcare workers was waived when polio vacinators were exploited to gather information in Abbottabad, Pakistan, which eventually led to the killing of the then world most wanted terrorist, Osama Bin Laden. What then makes the fate of the Chibok Girls different that CNN won’t without prompting furnish information to assist their freedom?

Could there be a conspiracy to allow Nigeria stew in the mess that the Chibok Girls abduction has been since it first occurred? Does anyone remember who Dr Andrew Pocock is? Dr Andrew Pocock was the former British High Commissioner to Nigeria. Yes, the one who told us when it was well past the time that the United States and the United Kingdom knew the whereabouts of about 80 of abducted Chibok girls but would not intervene? To prevent a scenario where the CNN will claim some months down the line that Nigerian authorities did not approach it for information about this video, the Army should immediately make that request now and hopefully the network would not interpret the request as harassment.

Additionally, is the CNN willing to give an unedited copy of the video it received to the appropriate authorities in Nigeria perchance the metadata can help to specifically geo-locate where the video was shot? If it turns out the version of the video it received has been stripped of all such markers before being handed over to it what guarantees does it have as to the authenticity of the clips as the terrorists, knowing what content analysis would be done, could have shot the video and made the girls say what they said at any other time in the distant past?

Beyond the pondering of whether or not CNN will assist the Nigerian Army and government with information that could lead to the rescue of the abducted girls, one must also begin to question where does it begin and where does it end. How far is too far? When does the receipt of a video footage, celebrated as “exclusive”, move from being legitimate and professional pursuit of stories to running the propaganda wing of a terrorist organisation?

Agbese writes from the United Kingdom.