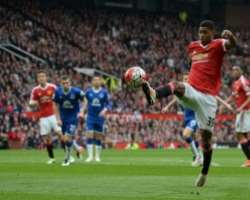 Fresh from keeping alive their hopes of winning a first trophy since 2013, Manchester United return to their bid to secure a place in next season’s Champions League when they host Aston Villa on Saturday.

United will play Everton in the FA Cup semi-finals at Wembley on April 23 thanks to their 2-1 win at West Ham United in their quarter-final replay in midweek as they look to win the competition for the first time since 2004.

As 11-time winners, United will regard that gap as too long and lifting the Cup would bring some comfort to under-pressure manager Louis van Gaal following a difficult second year at Old Trafford.

But playing in the Champions League has to be United’s highest priority for the rest of the season and, with a four-point gap to Manchester City in the Premier League’s fourth qualification place, they have to keep winning.

Van Gaal’s side may well have to take maximum points from their final six games to have any chance of catching City, or third-placed Arsenal, and they certainly can’t afford to drop any points when bottom club Villa visit Old Trafford.

With their relegation set to be confirmed, Villa won’t fancy facing United striker Marcus Rashford, whose superb winning goal at West Ham underlined the potential of a player who has been the success story of United’s under-achieving season.

“It’s incredible. It’s so good to see young lads come in, do well and take their chance,” said United midfielder Michael Carrick of the 18-year-old forward who has scored six goals since making his first-team debut at the end of February.

“Not in his wildest dreams could he have predicted the last two or three months that he’s had.

“He’s still got his feet on his ground though. He doesn’t change and he works hard and listens.

“He’s willing to learn and I think he’s got a great chance of staying at the top for a long time.

– Low spirits –
United captain Wayne Rooney could start after returning from two months out with a knee injury as a substitute against the Hammers on Wednesday.

Villa fans will head for Old Trafford in low spirits, knowing their club’s inevitable relegation will be confirmed before kick-off if Norwich City avoid defeat to Sunderland in the day’s early fixture.

A Sunderland victory at Carrow Road would prolong the agony for Villa, whose fate would still be rubber-stamped on Saturday unless they then win at Old Trafford — a feat they have achieved just once in 31 visits.

The anger among supporters intensified when Gabby Agbonlahor, the long-serving club captain, was placed on an initial two-week fitness regime following a damning assessment from caretaker manager Eric Black.

“I sat down with Gabby on Monday and we agreed together that we would put in place a fitness regime for him to get him up to speed so that he can be considered again,” Black said.

“We have put that in place for two weeks and it will involve some group work with us, some work with the under-21s and some work as an individual.

“I have to try to get the best out of the squad I’ve got and together we agreed that he wasn’t in a condition to be involved in the squad.

“He has agreed he needs to be in better condition and that is what I am trying to do, whether it’s one small step, I don’t know.

“I can’t do the running and get involved in that. It will be up to Gabby. It’s his responsibility.”