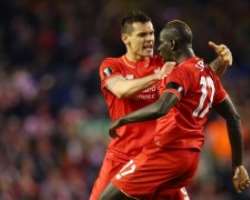 Dejan Lovren was the stoppage-time hero as Liverpool scored three times in the final 24 minutes in a magical Anfield comeback to dump Borussia Dortmund out of the Europa League.

After a 1-1 draw in the first leg of the quarter-final tie, Dortmund seized control with goals from Henrikh Mkhitaryan and Pierre-Emerick Aubameyang inside the opening nine minutes on Thursday.

Divock Origi got a goal back early in the second half, but Marco Reus’ ruthless finish appeared to have killed off the tie.

However, Philippe Coutinho’s impressive strike and Mamadou Sakho’s header set up a frantic finish at a raucous Anfield, with Dortmund clinging on in an attempt to progress on away goals.

It looked like they would do just that until Lovren headed home a winner in the 91st minute, prompting delirious celebrations from Liverpool’s players and manager Jurgen Klopp, who haunted his former club.

Klopp’s men move into the semi-finals after a night that will live long in the memory, alongside historic European comebacks against the likes of Saint-Etienne, Olympiacos and AC Milan. The tie had appeared dead and buried as Liverpool fell behind inside five minutes.

A quick break saw Shinji Kagawa – one of the visitors’ two changes from the first leg – and Gonzalo Castro combine to set up Aubameyang, whose volley from six yards was pushed away by Simon Mignolet, allowing the onrushing Mkhitaryan to side-foot home the rebound.

It was quickly two for Dortmund after Reus impressively surged forward and found Aubameyang with a precise pass. The Gabon international did the rest, taking one touch prior to finding the top corner with a powerful finish.

Origi – selected ahead of Daniel Sturridge in attack as at Signal Iduna Park – had a shot deflected wide and Adam Lallana miskicked badly from a good opening as the hosts attempted to reply.

Origi flicked another effort wide and Roberto Firmino – Liverpool’s only change from the tie in Germany – was off-target with a diving header.

At the other end, Aubameyang could not quite get enough on a sliding attempt and Mignolet got down sharply to keep out Kagawa as Klopp’s men, despite having made a spirited response, went into half-time with it all to do, having failed to test Dortmund keeper Roman Weidenfeller. Liverpool got back into the tie two minutes and 34 seconds after the restart when great midfield play from Emre Can resulted in Origi being sent through on goal and the Belgium international took one touch before slotting under Weidenfeller.

Hopes of a home comeback were seemingly dashed by Reus in the 57th minute. Mats Hummels brought the ball out from the back and slipped a great pass through to his Dortmund and Germany team-mate to convert with a confident first-time finish, prompting wild celebrations from Thomas Tuchel.

Klopp brought on Sturridge and Joe Allen just after the hour mark and Liverpool did strike with 24 minutes remaining. Coutinho played a neat one-two with James Milner and impressively found the bottom corner from the edge of the area.

Klopp was ecstatic on the touchline with 12 minutes remaining when an unmarked Sakho stooped low to head home a low Coutinho corner from inside the six-yard box, putting the Reds one goal away from the semi-finals.

And a famous comeback was complete when Sturridge found Milner, whose perfect cross to the back post was powered home by Lovren as Anfield erupted.

Key Opta stats:
– Only Aduriz (10) has scored more goals in the Europa League this season than Pierre-Emerick Aubameyang (8).

– Divock Origi has netted four goals in his last three Liverpool games after failing to score in his nine games previous to that.- The Reds conceded three goals at Anfield in a European tie for only the sixth time in their history.- Dortmund scored more goals (2) in the opening nine minutes of the game tonight than German opposition had managed in 13 previous trips to Anfield (one goal).- James Milner has now been involved in more Liverpool goals than any other player in 2015/16 (19 – seven goals, 12 assists).- Liverpool have never lost at home to German opposition in European competition (W11 D3).