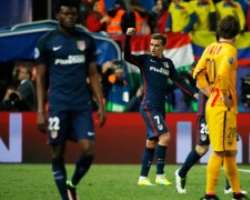 A deserved victory for Atlético. Barcelona should have had a penalty right at the end, of course; Gabi handled Iniesta's shot inside the box. But then should Iniesta have been on the pitch, after making a save as last man to concede a penalty himself a couple of minutes earlier? Questions, questions. But on the whole the home team were far superior. Every single one of their players put in a fine performance; the same can't really be said for Barcelona, who were very poor indeed. Lionel Messi stomped off with a face on, the most notable thing he did all evening. So Atletico make the semis, where they may get a chance to avenge their 2014 final heartbreak at the hands of city rivals Real. Barcelona, meanwhile, join the long list of Champions League winners unable to hang onto their crown. Ah well, there's always next year