Chris Giwa says his NFF board will 'start work on Monday 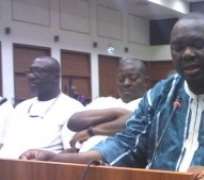 Chris Giwa, who was declared as the head of Nigeria’s Football Federation (NFF) following a high court ruling in Jos on Friday, says his board will officially start work on Monday.

The Amaju Pinnick led NFF board has appealed the ruling which sacked Pinnick in favour of Giwa – the man who had challenged him in September 2014.

In a move likely to incur the wrath of Fifa, the Jos high court declared those elections to be void, with Giwa telling local media in Abuja that all NFF matters will now come through him.

A defiant Giwa took his case to court and the elections which brought in Pinnick was voided, prompting Fifa to threaten a ban.

Then Nigerian President Goodluck Jonathan held talks with the two main protagonists in the NFF saga, the Fifa-recognised president Amaju Pinnick and the man who claims he should have the role, Chris Giwa.

The president then ordered Giwa’s associates to withdraw their case which had led to the ousting of Pinnick and the country averted a Fifa ban.

But in January 2016, after a meeting called by current sports minister Solomon Dalung aimed at reconciling the NFF descended into recriminations, Giwa re-filed his lawsuit.

On Friday, Justice Musa Haruna Kurya ruled: “By the orders of the court today, the Minister of Sports is compelled to recognize the Mr. Giwa Led Board of the NFF as the recognized board by law. The order also bars anybody from interfering with the duties and functions of the NFF board under the leadership of Chris Giwa. ”

But the NFF swiftly appealed a motion to vacate the order and a motion for a stay-of-execution against the judgment that has thrown the country’s game into fresh turmoil.

According to an NFF statement, since the appeal, a motion to vacate the order and a stay-of-execution was filed on the same day as the judgment, the status quo remains.

“This is a sad one primarily because we have enjoyed a period of peace and have been able to work without the court-today-court-tomorrow situation of the last half of 2014,” said NFF vice-president Seyi Akinwunmi.

“We have filed for stay-of-execution and that means the status quo remains and anything done is done at the actors’ peril. I can assure football-loving Nigerians that there is no reason to panic as we are in full charge and there is no trouble whatsoever.”

However, the Chris Giwa faction under the supervision of former NFF executives Effiong Johnson and Rumson Baribote – armed with the court ruling – took control of the NFF offices on Friday.

Nigeria now face the prospect of a Fifa ban, which could put their World Cup qualification hopes in jeopardy.