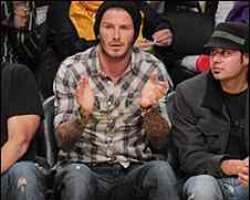 Beckham is England's most capped outfield player with 115 appearances

David Beckham is targeting a November return from the Achilles injury that ended his dream of playing in the World Cup in South Africa.

In March, Beckham was ruled out for up to six months but the recovery appears to be taking longer than expected.

That means Beckham will not feature in Major League Soccer this season, unless Los Angeles Galaxy reach the play-offs.

“I won't be running for another three months, so I will be playing again in, probably, November,” Beckham told ABC.

The next England game he is likely to be fit for is the 2012 European Championship qualifier against Wales on 29 March 2011.

Beckham underwent surgery in March after rupturing a tendon while on loan at AC Milan. He had previously said he expected to be back in action by September.

The former Manchester United star was still on crutches when he went to the studios of US TV network ABC on Monday.

“My mentality is to kind of push it and get moving and running as soon as possible. But it's an injury that has to take time to heal,” he said.

“It's frustrating. It's obviously disappointing because I've been working for the last two years to get into the English squad for the World Cup.”

Despite the injury, Beckham is still set to travel with England to the World Cup in South Africa.

England begin their campaign against United States on 12 June.

Beckham, who turns 35 on 2 May, joined Milan from the Galaxy to stay in shape during the MLS off-season and boost his chances of becoming England's first player to appear at four World Cups.

He has played 115 internationals – the most for an England outfield player and only second in the country's history behind goalkeeper Peter Shilton's 125 matches from 1970-90.