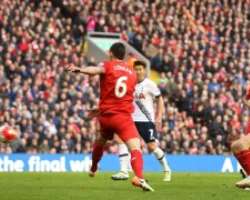 Tottenham's Harry Kane swivels to equalise against Liverpool during the 1-1 draw at Anfield. Photograph: Shutterstock/BPI/Rex

Tottenham Hotspur's title challenge faltered at a ground where they rarely manage to win, a comeback from a goal down allowing them to share the points without putting the desired amount of pressure on Leicester. The gap between first and second is now four points instead of two, and Claudio Ranieri and his players can increase that to an improbable seven if they manage to beat Southampton at home on Sunday afternoon.

This was not a bad Spurs performance, just a slightly tired, heavy-legged one, epitomised by Dele Alli's miss near the end. The England international had a chance to secure three points when Christian Eriksen played him in and Alli read the pass perfectly, yet his first touch showed Simon Mignolet too much of the ball and the opportunity was lost.

“I am happy with the way we fought back, with the character we showed,” Mauricio Pochettino said. “I am disappointed to drop two points but playing Liverpool at Anfield is never easy. We still have to keep trying to reduce the gap and we must continue to believe, because in football a lot can happen in a short time.”

Spurs began in a hurry, with Hugo Lloris launching quick balls forward from the back to find willing runners up front, succeeded in pinning Liverpool back in the opening exchanges and could have taken the lead after nine minutes when Mignolet made the first save of the game. Neat work on the right by Kyle Walker and Son Heung-min produced a shooting opportunity for Eriksen, who went for a first-time shot rather than taking care over direction and put the ball a little too close to the goalkeeper.

The contest was as evenly matched as expected, though the visitors were noticeably more confident on the ball and more adventurous in their passing. Philippe Coutinho was booked for a dive midway through the first half in a sign of Liverpool's frustration, choosing to go to ground when confronted by Toby Alderweireld when he seemed to have the opportunity to simply knock the ball past the him into unguarded space.

Spurs had another good chance to open the scoring shortly after that, when the Liverpool defence backed off to allow Kane to advance into the area. He had Eriksen up in support for a cross to the far post but forgivably decided he might as well have a go himself once he got within range. At least it would have been forgivable had he managed to hit the target, instead of scuffing a tame effort the wrong side of Mignolet's right-hand upright.

Nevertheless, Liverpool should have turned round in front, for a couple of chances arrived in quick succession just before the interval and neither Daniel Sturridge nor Adam Lallana was able to beat Lloris when the opportunity presented itself. The first miss was the more glaring. Sturridge had all the time in the world to beat the Spurs goalkeeper after being played clean through by Coutinho, but failed to come up with the decisive finish one would have expected and Lloris stopped an unconvincing shot with his knees. Lloris also kept out a shot on the turn from Lallana on the edge of the area, this time with a full length diving save, though that would have been something out of nothing.

Sturridge's opportunity was much more clear cut, and it was tempting to wonder whether a fully fit player would have stuck it away. That said, Kane too was guilty of similar hesitation in the closing minutes of the first half. With the target clearly in sight and Jürgen Klopp remonstrating furiously with the fourth official because he believed the ball had gone out of play earlier in the move, Tottenham's leading scorer delayed his shot far too long and practically invited Dejan Lovren to stick a foot in the way.

It appeared all Spurs had to do in the second half was to produce a little more dynamism to expose Liverpool's suspect defending, but Alli was not quite the livewire we have come to expect, and when Kane picked him out in front of goal soon after the restart his header was more of a clearance than a threat. That suggestion of carelessness was punished almost immediately when Liverpool took the lead on their next attack with a goal of the highest quality. Coutinhobegan and ended the move, supplying Sturridge just inside the area then moving forward to accept a perfectly weighted return pass, before finding Lloris's bottom corner with the neatest of right foot finishes.

Spurs almost found an even better-looking response when Eric Dier's elegant, chipped pass into the area was read by Son and taken on the volley, unfortunately for the visiting support in the Anfield Road end the shot flashed narrowly wide. Liverpool's lead only lasted a few minutes longer, however, when Eriksen did well not only to keep the ball in play on the left but to find Kane with a flick into the area, the striker did what he had failed to do in the first hour and came up with a shot swift and accurate enough to surprise Lovren and beat the goalkeeper. “We switched off, we thought the ball was out,” Klopp said. “But I must say Harry Kane is a really nice striker.”

The Liverpool manager even embraced Kane like one of his own players after the final whistle. Spurs managed to raise their tempo after scoring, though getting back on level terms was as good as their evening got. A draw was all they deserved, particularly as the excellent Coutinho twice went close to putting Liverpool in front again. On one occasion, as the ball flashed across the goalline without going in, the Brazilian kicked out at an advertising board in frustration. It was a frustrating day for both sides, but after two draws this season the truth might simply be that they are evenly matched.

“It was a tough game,” said Kane, whose 22 goals this season are a Spurs record in the Premier League era. “It would have been nice to go on and win it, but we did all we could. We can't do anything else now except watch Leicester.”