After scoring versus Watford, Alex Iwobi says he is living a dream with Arsenal 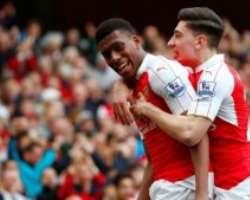 Alex Iwobi says he is living a dream with Arsenal after scoring one goal and creating another in his side’s 4-0 Premier League win over Watford on Saturday.

The Nigeria international set up Alexis Sanchez’s opener after just five minutes at Emirates Stadium and doubled the home team’s lead before the half-time interval.

Iwobi’s first-time finish made it two goals in as many Premier League games after he had also found the net against Everton. He left the field in the 74th minute to a standing ovation to be replaced by Theo Walcott, who scored Arsenal’s fourth.

“Happy for the team, glad we won. It’s all for the team and I’m glad we’ve got the three points,” Iwobi told BBC Sport.

“When you’re young you dream of this and this is like a dream come true, winning with this team.

“Winning the title would be amazing but we’re taking each game as it comes, game by game, and we’ll see where we end up come the end of the season.”

Hector Bellerin scored Arsenal's third goal after the break, his left-footed volley taking a heavy deflection before reaching the back of the net.

The full-back insists the players will continue to fight for the Premier League until it is mathematically impossible for them to be crowned champions.

“Good to come back with a win after the international break. The team needed a good performance,” Bellerin told BBC Sport.

“It’s nice too for youngsters to get experience. If you don’t try you never score. We will never give up on the title chase until the end of the competition.”