Iheanacho eager for opportunity against Pharohs 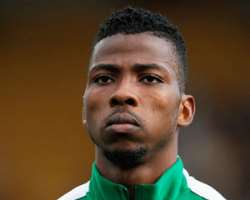 Iheanacho says he can play as a main striker, a support marksman or from the flanks but will respect Siasia's decision to play him in any of the offensive positions.

The 19-year-old who has played just once for Nigeria at senior level is keen to make a contribution against the Pharaohs as the Super Eagles look to top Group G of 2017 Afcon qualifying for the first time.

“I can play (as a) centre forward and I can (also) play (as a second) striker.

“I can also play from the (flanks) so it depends on the coach (where I eventually get to play).

“The coach knows the squad and knows the qualities of all the players so he knows who will be ideal in any position,” he said.

Iheanacho has been a revelation in his first season at City netting nine times in all competitions of the Citizens this term.

He is however eager to replicate similar performances for the Super Eagles.

“I have been scoring goals for my club but I also have to do the same for my country.

“I have to help my country too by playing well and helping them score goals too,” he added.

Iheanacho's only senior appearance for Nigeria was on November 13, 2015 when he was drafted as a substitute for the final 24 minutes (after replacing Rabiu Ibrahim) in a 2018 Fifa World Cup qualifier against Swaziland at the Somhloho national Stadium, Lobamba.