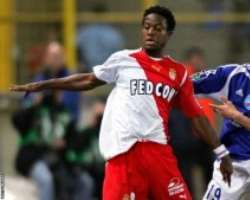 The 36-year-old enjoyed a 20-year career that spanned 13 clubs, including spells at Italian giants Inter Milan and French league side Monaco.

“It is a long journey that has come to an end,” said Kallon, who last played two years ago in a Sierra Leone league match for his own club FC Kallon.

Kallon earned 35 caps for his country, who he skippered for seven years, and scored 14 goals.

“It’s difficult for me to quit because I have passion for the game,” he added. “But I feel I have done a lot for myself and my country and this is the right time for me to hang up my boots,” added the ex-striker.

“I’m still fit to play but I believe the upcoming players need more from me than what I can achieve in continuing playing.

“It’s sad to leave but this is life. I’ll miss the pitch, the fans and the pressure before a match.

“It’s time for me to fully concentrate on my family, particularly on my son who is about to start playing football.

“I haven’t decided what I want to do next. My main focus now is to be with my family and prepare myself to study for the A licence coaching course,” added Kallon, who has the Uefa and Confederation of African Football B licences and briefly served as Sierra Leone U-17 coach in 2014.

‘Youngest player’
When aged only 15, Kallon made his debut for Leone Stars against The Gambia in 1995 in a 1996 Africa Cup of Nations qualifier.

Then in the Nations Cup finals in South Africa the following year, the 16-year-old Kallon became the tournament’s youngest player and scored the winning goal for Sierra Leone in a 2-1 win over Burkina Faso.

During his Leone Stars career he played alongside his two elder brothers Musa Kallon and Kemokai Kallon. His last match for his country came against Sao Tome & Principe in a 2015 Nations Cup qualifier in Freetown on in June 2012.

The highlights of his club career include the 2001-02 season at Inter Milan where he scored nine goals in 29 matches becoming the team’s second top goal scorer of the season.

His only silverware came in 2005 when he helped Saudi Arabian club Al-Ittihad to win the 2005 AFC Champions League, where he was top scorer of the competition.

In 2013, Kallon made a bid to become president of the Sierra Leone Football Association but was disqualified from contesting.