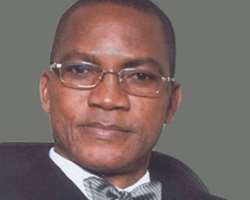 By Collins Nweze
Nigeria expects to spend 35.32 per cent of its revenues servicing debt this year, up from 28.1 per cent for both federal and state governments in 2015, the Debt Management Office (DMO) has said.

The two-year debt service ratios released by the debt office showed that of the N6.32 trillion combined revenues for state and federal governments in 2015, only 28.1 per cent went to debt service in 2015. However, the figure will rise marginally to 35.32 per cent of the N3.85 trillion revenue for the Federal Government alone, this year.

These figures by the debt office have put to rest claims by the Islamic Development Bank (IDB) that the country spends about 80 per cent of its revenue to service debt.

The IDB Country Representative in Nigeria, Mumammed Kiliaki, ranked Nigeria among the countries using the largest percentage of its revenue to service foreign debts. He declared that Nigeria spent 80 per cent of her revenue on debt servicing.

Kiliaki, who spoke during an interaction with Senate Committee on Local and Foreign Debts, headed by Senator Shehu Sani, said the development was responsible for the bleeding of the economy.

It also disclosed that domestic debt rose to N8.83 trillion last year, up from N7.9 trillion in 2014. DMO added that domestic debt of states stood at N1.65 trillion or $9.85 billion. The DMO's statement comes on the heels of announcement by the African Development Bank (AfDB) that Nigeria had requested for a loan of $1 billion to help fund its budget deficit for 2016 fiscal year.

The Federal Government has said it is planning to borrow as much as $5 billion to help fund the expected deficit of N3 trillion in 2016, which is up from an initial N2.2 trillion estimate.

Minister of Finance, Mrs. Kemi Adeosun, disclosed that Nigeria held talks with the World Bank and was considering options to borrow from the AfDB and China Exim Bank.

Adeosun said about $4 billion might come from international institutions and the balance from Eurobonds.

In December, President Muhammadu Buhari presented a N6.08 trillion budget for the year to the National Assembly, an increase from N4.4 trillion for 2015, which the government hopes will help tackle an economic crisis triggered by the plunge in oil prices.

However, the DMO Director-General, Dr. Abraham Nwankwo, insisted that the country's public debt-to-GDP remained sustainable despite the slump in crude oil prices. According to him, while other countries base their borrowing on debt- GDP ratio of 56 per cent, Nigeria will not exceed 19.39 per cent until 2017.

He said: 'Our debt continues to be sustainable, despite all these volatilities in the international capital market and the collapse of oil prices. However, it does not mean that Nigeria should go and sleep, and hope that providence will continue to provide for them.'

He noted that the country has abundant resources in agriculture, solid minerals, Information Communications Technology (ICT), among others, that offer ample opportunity for diversification of the economy to boost revenue.

It will be recalled that during her visit to the country last month, the Managing Director of the International Monetary Fund (IMF), Christine Lagarde, said given the determination and resilience so far displayed by Buhari and his team, Nigeria does not need any loan from the Fund.

She stated that though Nigeria did not need IMF loan, fiscal discipline was needed for the country to be sustainable.

Debt servicing
Data from the DMO showed that the total external debt service payment for the year 2004 was $1.75 billion compared to $1.81 billion in 2003, reflecting a decrease of $0.054 billion or 3.01 per cent. The external debt service payments of $1.75 billion comprised of principal repayments of $1.17 billion, and interest payments and commitment charges of $0.589 billion.

'The $1.75 billion debt service paid in 2004 is actually well below the debt service due for the year of $2.99 billion. This arises from the fact that Nigeria has not fully serviced its Paris Club debts, as an amount of $2.23 billion was due while only $0.99 billion was paid. The shortfall transforms into arrears and attracts severe penalty interest. This very process has contributed to the explosion in Nigeria's external debt stock over the years,' the debt office said.

DMO's monthly auction
A report by FBN Quest, an investment and research firm, said the DMO's monthly auction of FGN bonds last Wednesday raised its target of N100 billion from the sale of three issues including a new 20-year benchmark. The total bid of N262 billion was highest since July 2014 when the DMO launched a new long bond.

The firm explained that the figure was no coincidence since the Pension Fund Administrators (PFAs) have a healthy appetite for long-term assets to match their liabilities. The prevailing abundance of liquidity, it said, would equally have fuelled demand. The DMO can also be pleased with the downward monthly trend in marginal rates.

The FBN Quest explained that since inflation has picked up by three percentage points in the intervening period and since offshore interest has evaporated, the DMO should be pleased with the new effective coupon on the instrument.

It demanded that the 2016 budget should be approved well before the next auction, which would give the DMO a better platform for its issuance calendar for June, this year. The Federal Government's budget proposals project net domestic issuance this year of N950 billion. The onus falls upon the DMO since the CBN's sale of treasury bills is likely to remain flat.

In 2004, the DMO made plans to build on the success of the first FGN Bonds floatation that were first issued in 2003. The DMO embarked on the arrangements to commence the issuance of bonds on a regular basis in small tranches that the market could accommodate.

The Nigerian Bond market remained undeveloped, particularly the secondary market for government securities and the DMO put in place a framework for the development of a vibrant secondary market.

The DMO was established on October 4, 2000 to centrally co-ordinate the management of Nigeria's debt, which was hitherto being done by a myriad of establishments in an unco-ordinated fashion. This diffused debt management strategy led to inefficiencies.

It was expected that the coming of DMO would lead to good debt management practices that make positive impact on economic growth and national development, particularly in reducing debt stock and cost of public debt servicing in a manner that saves resources for investment in poverty reduction programmes.

The body is also expected to prudently raise financing to fund government deficits at affordable costs and manageable risks in the medium and long term; achieve positive impact on overall macro-economic management, including monetary and fiscal policies; avoid debt crisis and achieving an orderly growth and development of the national economy.

Lagos IGR example
CBN data for 2014 revealed that internally generated revenue (IGR) provided 21.8 per cent of the total revenue of the 36 states and the Federal Capital Territory, compared with 15.3 per cent the previous year.

Aggregate IGR grew by 37 per cent to N801 billion from N586 billion in 2013. Again, Lagos emerged as the leading state achieving an IGR/total revenue ratio of 67 per cent while Ogun, Rivers and Anambra managed 40 per cent, 32 per cent and 31 per cent respectively.

The report said given that the oil price has been on the slide since mid-2014, states have no choice but to reduce their dependence on the oil-driven monthly distributions from the Federation Account Allocation Committee (FAAC) by bolstering their IGR.