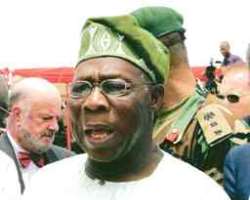 The Chapel, a Christian worship centre in the Presidential Villa, was built and established by Obasanjo during his eight-year tenure in Aso Rock.

A statement from the Office of the Acting President made available to our correspondent in Abuja on Sunday also disclosed that seven state governors were also honoured at the occasion.

Speaking at the occasion, Obasanjo had in an emotion-laden voice, went down memory lane to narrate how the chapel was established in the Presidential Villa.

The former President said he was tremendously blessed and inspired while attending services at the chapel during his tenure.

Obasanjo was honoured for building and establishing the chapel.

He also noted that God's help and the support of men and women of goodwill was required if Nigeria must surmount the various challenges facing it.