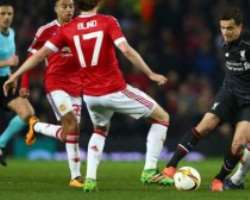 Liverpool, Sevilla and Borussia Dortmund booked their tickets on Thursday for the quarter-finals of the Europa League, eliminating Basel, Manchester United and Tottenham respectively.

Holders Sevilla, who have won the tournament four times since 2006, thumped Basel 3-0 to cruise through 3-0 on aggregate, with a first-half brace from Kevin Gameiro after Adil Rami had headed them into the lead.

Liverpool battled out a creditable 1-1 draw at historic rivals United to go through comfortably 3-Anthony Martial gave United the lead with a calm penalty in the 32nd minute, after having been brought down himself by Nathaniel Clyne.

Just before the interval, Philippe Coutinho made it 1-1 with a classy finish.

The goal left United needing three more, and the disjointed, dispirited side of Louis van Gaal never seemed capable of pulling off an improbable comeback.

Also out are Tottenham, who crashed 2-1 at home to Dortmund for whom Pierre-Emerick Aubameyang scored a handsome brace.

Heung-Min Son scored a late consolation goal for Spurs, who went out on a humbling 5-1 aggregate.

The comeback of the night belonged to Braga, who trounced Fenerbahce 4-1 to go through 4-2.

Shakhtar Donetsk won 1-0 at Anderlecht to cruise through 4-1.

Earlier Athletic Bilbao, Villarreal and Sparta Prague reached the quarter-finals of the Europa League at the expense of Valencia, Bayer Leverkusen and Lazio.

Bilbao lost 2-1 to Valencia, who started with Socceroo Mat Ryan in goal, but squeaked through on the away goals rule, with a 2-2 aggregate.

Valencia swept into a promising 2-0 lead but conceded the vital away goal to Bilbao’s ageless striker Aritz Aduriz.

Santi Mina opened the scoring for Valencia in the 13th minute after good work down the left by the impressive Jose Gaya.

Defender Aderlan Santos made it 2-0 eight minutes before half-time by heading in an excellent centre from Gaya.

Bilbao dominated the second half and tournament top scorer Aduriz, 35, saved the Basques from elimination by beating Ryan 15 minutes from time, despite what seemed to be a handball by Markel Susaeta earlier in the move.

“I never like to put the blame on the referee, but when he sees (on television) what occurred, he will be disappointed with himself,” Neville said.

“I didn’t insult him at all. I just said that it was handball. This was a very unfair match. We should have won by four or five goals. You need a bit of luck in football, and we didn’t have that tonight.”