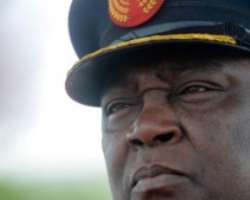 Retired air chief marshal Alex Badeh is on trial at a federal high court in Abuja, accused of diverting 3.97 billion naira ($19.8 million, 18 million euros) for his own use.

The 59-year-old, arrested as part of a wide-ranging anti-corruption campaign by President Muhammadu Buhari, denies 10 counts of fraud, criminal breach of trust and money laundering.

The finance director under Badeh when he was chief of air staff at the time of the alleged offences in 2013 said he exchanged 558.2 million naira for dollars every month on his boss’ instructions.

The money was part of some four billion naira set aside for monthly salaries for air force personnel, retired air commodore Salisu Abdullahi Yushau told the court in evidence.

The withdrawals were accounted for “as salaries because the disbursement was done along with salaries”, he said.

Yushau, who retired in December 2013, said he bought properties with the money for Badeh and his son, including a mansion in the upmarket Maitama district of Abuja worth 1.1 billion naira.

Former president Goodluck Jonathan appointed Badeh chief of defence staff in January 2014 at a time of growing dissatisfaction at the military’s handling of the Boko Haram insurgency.

Badeh vowed a swift end to the conflict but his time in office saw the Islamist militants run riot in three northeast states, seizing swathes of territory.

Nigerian troops seemed unable — and were often unwilling — to fight back, with complaints about a lack of weapons and even bullets compared to the better armed militants.

On Badeh’s watch, Boko Haram kidnapped more than 200 girls from their school in Chibok, in Borno state, northeast Nigeria.

Trial judge Okon Abang adjourned Badeh’s case and remanded him in custody until March 23 to allow the defence time to prepare cross-examination.