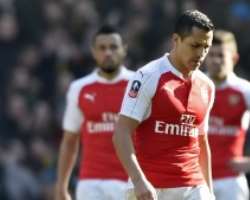 Arsenal were dumped out of the FA Cup with a 2-1 loss at home to Watford in the quarter-finals, with their season in disarray.

Danny Welbeck could have drawn Arsenal level in the dying minutes, after having pulled a late goal back, but missed a huge chance to keep their challenge for a third successive FA Cup alive.

Now, with four defeats in seven games, Wenger faces renewed speculation about his future with the club’s best chance of silverware evaporating.