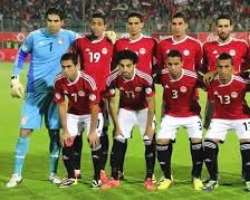 Egypt national team goalkeepers' trainer, Ahmed Nagi, believes that the substance of announcements from Nigeria's coach won't affect players ahead of the two sides' game in the 2017 Africa Cup of Nations qualifiers this month.

Samson Siasia is adopting a “no fear” approach as his side prepares to face Egypt in the Nations Cup qualifiers.

Siasia believes the Super Eagles have nothing to worry about in the double-header.

“We're used to hearing these kinds of comments from African coaches,” he added.

“The statements indicate he is worried about the Egypt clash,” he said.

“Siasia respects the Egypt team. He knows our abilities. And we also respect the Nigeria team, as they are strong opponents, so I hope to achieve a positive result,” Nagi said.

Nigeria will host the Pharaohs on March 25 in Kaduna before playing the follow-up match four days later in Borg El-Arab Stadium in Alexandria.

“The team will hold a camp 19 March as the squad will be announced after the CAF Champions League and Confederation Cup games. Then we will fly to Nigeria on 23 March in a private jet to Kaduna,” the goalkeeping coach revealed.

With only the group winners guaranteed automatic qualification for the 2017 Cup of Nations, second-placed Nigeria have no choice but to beat group leaders Egypt to improve their position in the group.

Egypt are leading group G with six points, two ahead of Nigeria.