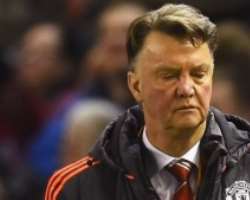 That's about it, though.
The Manchester United manager was disappointed his side failed to rise to the occasion in the first ever meeting between Liverpool and United in Europe. The 2-0 loss in the Europa League first leg isn't sitting well with him.

For one thing, United winger Memphis gave away a penalty just inside the 18. Then the linesman failed to deem Adam Lallana offside in the build-up to Roberto Firmino's late tally.

From the BBC:
“I have to say that Liverpool created an atmosphere that was fantastic. They played very good in the first half and we could not cope with their pressure. David de Gea was fantastic. But we had a cheap penalty and in the second half we changed the shape. We had much more contribution to the game but we didn't create enough.

“They scored another cheap goal, he was offside, and that is difficult. Losing 2-0 is a difficult result for us but we have to create an atmosphere like that next week.”

Van Gaal added that he didn't see an incident where Marouane Fellaini elbowed Emre Can in the face, but praised the midfielder's overall game.

The second leg is in one week at Old Trafford, and United will need to show the same level of passion as Liverpool did on Thursday. Otherwise, the OT crowd will bring a level of vitriol similar to the positive electricity hailing from the Anfield faithful.