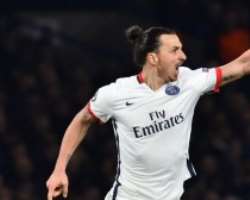 Zlatan Ibrahimovic won’t lack for suitors when his contract expires in June — but Chelsea will hope it won’t have to face the Swede again any time soon.

That’s because the Paris Saint-Germain forward scored once again as his side knocked Chelsea out of the Champions League for the second year in succession.

Ibrahimovic has yet to decide where he’ll be playing his football next season but a move to English football would not be out of the realms of possibility.

The 34-year-old, who scored in his side’s first leg victory of this last-16 tie, steered his team into the quarterfinals of Europe’s top club competition with a hugely impressive performance.

He was on form at Stamford Bridge, setting up his side’s first goal and scoring its second to secure a 2-1 victory on the night and a 4-2 win on aggregate.