Zidane will not let Ronaldo go 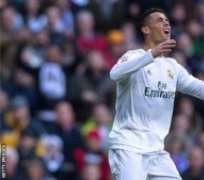 Real Madrid manager Zinedine Zidane says he is “not in favour” of selling Cristiano Ronaldo, despite fans turning on the club’s record goalscorer.

Ronaldo had appeared unhappy with his team-mates after the team’s 1-0 defeat by Atletico Madrid on 27 February.

“I am the coach and I want him,” said Zidane, ahead of Tuesday’s Champions League game with Italian side Roma at the Bernabeu.

Real lead the last-16 tie 2-0 from the first leg.
Ronaldo scored four goals in the space of 26 minutes in last Saturday’s 7-1 league win over Celta Vigo.

That took his league tally for the season to 27 and saw the former Manchester United player replace Barcelona’s Luis Suarez at the top of the list of leading scorers in La Liga.

Gareth Bale could make his first start since suffering a calf injury on 17 January.

The Wales international, 26, made a goalscoring return after coming on as a substitute in the 7-1 league win over Celta Vigo last Saturday.

Roma winger Diego Perotti believes his team-mates have the quality to do the “impossible” and overturn a 2-0 first-leg deficit in Spain’s capital.

“We’ve come here to pull off the impossible. We know we have to score twice and it won’t be easy, but anything is possible,” said the Argentine.