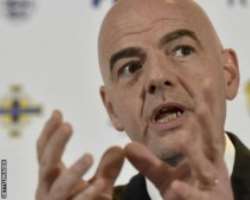 A trial of the use of video assistant referees for “game-changing decisions” in football will begin no later than the 2017-18 season.

Technology would only be applied to key incidents concerning goals, red cards, mistaken identities and penalties.

The International Football Association Board (IFAB) says it has had interest in hosting live trials from 12 national associations and one confederation.

The news was announced following a meeting of the IFAB in Cardiff.

New Fifa president Gianni Infantino, who believes greater use of technology within the game is inevitable, called it a “historic” day for the sport and said the decision proved the game’s leaders were “listening to football”.

The IFAB, which is made up of the four British football associations and Fifa, says a final decision on approving the technology for use throughout the game will only be made following a thorough period of testing and an agreement on the protocols for its use.

Infantino said: “We cannot close our eyes to the future but it doesn’t mean to say it will work.

“The flow of the game is crucial. We cannot put that in danger. That is why we have to be open to test.”

In addition to the video technology trials, the IFAB has also decided to end the ‘triple punishment rule’.

It means in instances in which the referee feels defenders have made a legitimate attempt to make a tackle inside the penalty area, they will not be sent off if they commit a foul. A penalty and, possible goal against their team, is deemed sufficient punishment.

This would not apply when the offence is holding, pushing or pulling, the defender does not attempt to play the ball or the offence would be worthy of a red card if it had been committed elsewhere in the penalty area.

How will video referees work?
Will the natural flow of the game be disrupted?
The IFAB is determined this must not happen. At their news conference on Saturday, it was stressed repeatedly that if the flow of the game was hindered, the video experiment would not be implemented on a full-time basis. Logistical issues, such as when a referee stops the game for a video review, are the major reasons the IFAB have been so reluctant to say when the experiment will begin.

What about offside?
Ordinarily, referees will not stop the game to review an offside decision. However, there is a caveat. Goals can be reviewed so if there is a potential offside in the build-up to a goal, this can be checked.

Will we see it in Britain?
It is possible. The IFAB says 12 countries have expressed interest in hosting trials. Scottish Football Association chief executive Stewart Regan said the Scottish Cup could be the ideal vehicle, so it is fair to assume Scotland is one of those interested.

At which levels of the game will it be used?
This is still to be decided. Football has always been proud of the fact the game is essentially the same, whether it is played on a park or in the biggest stadiums. Technology, clearly, is not available to all. However, even at a professional level, not all grounds in all countries have access to the number of cameras needed to provide adequate cover to make key decisions.

Will players like it?
Generally speaking, those involved in the game – be they players, managers or officials – are willing to embrace anything that ensures more correct decisions are made. No system is 100% foolproof. But tight goalline decisions, such as the one that went against Tottenham in Saturday’s north London derby, are now being made correctly because of video technology. Provided it is implemented properly, there is no reason to believe further improvement will not be made with the forthcoming trials.

The word count has been halved and gender neutral language introduced throughout.

One of the amendments relates to a player who is injured by a challenge punished by a yellow or red card. Rather than the injured player having to leave the field, which gives the offending team a numerical advantage, the player will be able to have treatment on the pitch (Law 5).

The kick-off is also changing, with players able to move the ball in any direction, rather than just forward (Law 8),

There will also be experimentation with a fourth substitution within extra time, although the league or competition for the trial is yet to be decided.