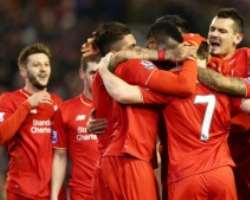 Manchester City’s Premier League title hopes hang by a thread after Liverpool gained a measure of revenge for their League Cup final heartache with a 3-0 triumph at Anfield.

Liverpool were beaten in a Wembley shoot-out on Sunday, but Jurgen Klopp’s side soothed their penalty pain by completing a top-flight double over a City side who remain 10 points off the summit after a third league loss in a row.

Goals late in the first half from Adam Lallana and James Milner illuminated an opening period that had otherwise felt very much like a hangover from the weekend’s encounter for both teams.

City were fourth when they previously won the League Cup in 2013-14 – as they are after Wednesday’s loss – and subsequently went on a storming run to claim the league title at Liverpool’s expense, but a repeat this season looks highly unlikely after Roberto Firmino dished out further punishment 12 minutes into the second half.

Despite having a game in hand, City’s hopes of being crowned champions look slim, while Liverpool are now only six points behind them.

The visitors’ weekend spot-kick hero, goalkeeper Willy Caballero, was replaced by regular number one Joe Hart as Manuel Pellegrini made three changes, while Klopp switched out five and handed a first start since May 2014 to long-term injury victim Jon Flanagan, but there was no Daniel Sturridge.

Fernandinho, who scored for City at the weekend, headed just wide from David Silva’s early free-kick, while Firmino’s long-range effort was straightforward for Hart in a sluggish opening 20 minutes.

Even the usually dangerous Sergio Aguero, who saw two jinking runs ended inside the box before he could get a shot away, was failing to make an impact.

But Lallana – who missed his penalty in London – showed the City striker the way in the 34th minute, collecting the ball 40 yards out before advancing towards goal and unleashing a low shot that skidded past Hart as the England goalkeeper dived to his left.

Hart was beaten again before the interval when ex-City midfielder Milner gathered Firmino’s pass and darted in to toe-poke a finish into the bottom-right corner.

Aguero then saw a point-blank header forced off the line by Milner amid suspicions of handball as the hosts took a two-goal advantage into the break.

Liverpool won 4-1 at the Etihad Stadium in November and looked hungry for more in a second half that saw Wilfried Bony replace Sterling.

The third arrived when a mistake from Nicolas Otamendi ultimately led to Lallana playing in Firmino to prod the ball home.

City’s frustration was evident, as Jesus Navas went into the referee’s notebook after a tangle with the impressive Lallana.

But a more constructive response was not forthcoming, as the away side were left without a win at Anfield since 2003 and quite possibly out of the title race in Pellegrini’s farewell season.

Key Opta facts:
– Kolo Toure made his 300th Premier League start in this match – the first African player to reach this landmark in the competition.

– Adam Lallana has scored three goals in his last four Premier League appearances, the same number he had in 37 league apps prior to this run.

– James Milner's goal (and Liverpool's second of the game) was the 1500th that they have scored in the Premier League.

– James Milner has now scored in 41 different Premier League matches and never lost – only Darius Vassell (46 games) has a superior record to this in the competition.

– Manchester City have lost three Premier League games in a row for the first time since November 2008.

– Roberto Firmino has both scored and assisted in three of his last five Premier League appearances for Liverpool.

– There have been 37 goals scored in the last 10 meetings in all competitions between these two sides (3.7 per game).

– Sergio Aguero has scored just one goal in eight Premier League appearances in the month of March, despite playing 606 minutes.