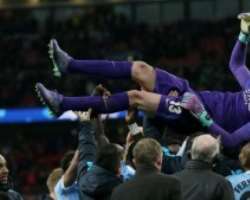 Manchester City guaranteed manager Manuel Pellegrini some silverware in his last season in charge with a penalty shootout defeat of Liverpool in the League Cup final after Sunday’s match at Wembley ended 1-1.

Earlier, Fernandinho gave City the lead after 49 minutes when his shot slipped through keeper Simon Mignolet’s grasp but Coutinho levelled with seven minutes to go from a rebound.

Mignolet and Caballero made vital saves in extra time but City clinched the season’s first trophy in dramatic fashion to give Pellegrini his second League Cup, having also lifted it two years ago as well as the Premier League title.

Advertisement
Once the now familiar pre-match razzamatazz of pyrotechics and national anthem was concluded, the final failed to ignite in a first half low on quality.

Liverpool were assured in possession without having much cutting edge and it was counter-attcking City who came closest to scoring after 22 minutes when Sergio Aguero’s shot was touched against the post by Mignolet.

Aguero had led Liverpool centre back Mamadou Sakho a merry dance in the build-up, the Frenchman still dizzy after an earlier clash of heads with teammate Emre Can, which eventually forced him off to be replaced by Kolo Toure.

The second period was action-packed and it was four minutes old when the deadlock was broken in a moment Mignolet will want to forget.

Aguero slid a pass to the sprinting Fernandinho down the right and while the Brazilian’s shot from a tight angle was well struck, it should never have squeezed past the keeper.

Raheem Sterling, loudly booed by Liverpool fans throughout, could have killed off his old club on the hour but steered a shot wide with the goal gaping.

City took charge and Aguero was denied a clear-cut penalty when tripped by Alberto Moreno and Mignolet redeemed himself with a low save to keep out the Argentine’s shot.

Liverpool boss Jurgen Klopp sent Lallana on with 20 minutes remaining and the England midfielder was involved in the equaliser.

Arriving unmarked in the area, he prodded Daniel Sturridge’s cross against the post and the ball deflected kindly for Coutinho to beat Caballero in front of a red wall of Liverpool supporters who set off flares in celebration.

Mignolet denied Yaya Toure and Fernando in the nervy final minutes while at the other end Liverpool substitute Divock Origi was close to touching captain Jordan Henderson’s shot past Caballero.

Aguero had the first clear chance in extra time when he was denied by a reflex save from Mignolet.

Caballero, preferred to Joe Hart in goal, made an even better stop to keep out Origi’s point-blank header at the start of the second period of extra time.

Former City midfielder James Milner’s poor back header gave the lurking Aguero a chance but he stabbed his effort well over.

Liverpool drew first blood in the shootout when Fernandinho’s spot kick hit the post but three consecutive failures made it a miserable first English final for German Klopp.