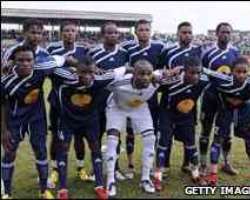 Mazembe continue the defence of their Champions League title against Djoliba

Reigning champions TP Mazembe of DR Congo are one of 16 sides battling to reach the group stages of the African Champions League.

The big-spending Congolese side continue their defence with a first leg game away at Mail's Djoliba, who have never progressed beyond the third round.

The Malian side have scored just twice in four Champions League games this year and have conceded just one goal.

Mazembe should prove too strong for Djoliba over the two legs, but the likely mid-year transfer of captain and consistent scorer Tresor Mputu Mabi to a European club may weaken their challenge.

SuperSport United take on Nigerian visitors Heartland as they try to boost the image of South Africa in the African Champions League.

Orlando Pirates are the only South African side to have won the continent's top club competition and they made a shock first round exit this year.

But SuperSport will have to do without goalkeeper Emile Baron, defenders Morgan Gould and David Kannemeyer and striker Glen Salmon through injury.

They are also missing Bongani Khumalo, who is with the national squad on a pre-World Cup training camp in Germany.

Early exits from the domestic League Cup and FA Cup competitions have not helped the club's morale, nor have media reports linking their coach Gavin Hunt to big-spending Pretoria neighbours Mamelodi Sundowns.

Hunt longs for African success after an unexpected second round loss to KCC of Uganda last year.

Heartland, who are the sole Nigerian challengers after the surprise early elimination of Bayelsa United, suffered the heartbreak of losing the final last year to TP Mazembe on the away-goals rule in the DR Congo.

Six time African Champions Al Ahly of Egypt are without injured striker Emad Moteab as they travel to play Al Ittihad in Libya while compatriots Ismailia confront Al Hilal of Sudan in Omdurman.

Fixtures between high scorers Esperance of Tunisia and Al Merreikh of Sudan in Tunis and 1998 runners-up Dynamos of Zimbabwe and Botswana's Gaborone United in Harare complete the line-up.