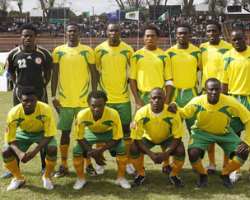 In the NPFL Match Day 1 fixture at the Sani Abacha Stadium in Kano, first half play was entertaining and lively, with both sides wasting many goal-scoring chances.

Rangers striker Chiamaka Madu opened the scoring for the visitors in the 49th minute with a good header.

But Kano Pillars’ captain Gambo Muhammad equalised for the home side in the 77th minute with a good effort, after receiving the ball from Shagari Muhammad.

Kano Pillars new signing Prince Aggreh gave his side the lead in the 90th minute.

Speaking after the game, Kano Pillars’ coach Baba Ganaru commended his players for their brilliant performance.

I am pleased with the performance of the boys in general and I also commend Rangers players for their performance, he said.

Rangers’ coach Imama Amapakabo said the result was part of the game of football.

That is football. But it is a painful defeat for us, because we played very well, he said.