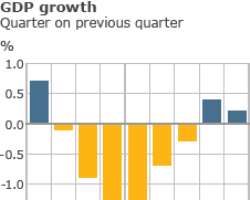 The UK economy continued to recover from recession in the first three months of the year, according to official estimates.

GDP grew by 0.2% between January and March, the Office for National Statistics (ONS) said.

That was weaker than the 0.4% growth predicted by many economists, but the figure may be revised.

The ONS said the bad weather seen at the beginning of the year may have had an impact on output – particularly in the retail and industrial sectors.

But despite that, manufacturing output grew by 0.7% over the quarter, while the utilities sector saw output rise by 2.5%

However, the bulk of growth came from the business and financial services sector, which saw growth of 0.6%.

The sector including retail, hotels and restaurants shrank by 0.7%.

Trevor Williams, chief economist at Lloyds TSB, said the figure suggested the UK was set for a slow recovery from recession.

“The economy is still recovering,” he told the BBC.

“The declines of 2008 are still having an impact [and] the recovery will remain rather weak and could disappoint.”

But Howard Archer, chief economist at IHS Global Insight, argued that the lower-than-expected growth figure was “not in itself overly worrying”.

“Overall growth in the first quarter was clearly dragged down appreciably by the very bad weather in January, and most indicators suggest that there has been a marked pick up in activity since then,” he said.

“Furthermore, there must be a very good chance that first quarter GDP growth will be revised up in future releases as more data for March become available and show improved activity.”

The ONS will release two further estimates for growth in the first quarter, based on more detailed economic information not yet available.