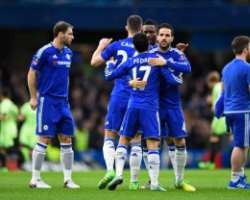 Chelsea eased into the quarter-finals of the FA Cup by beating a youthful Manchester City side 5-1 at Stamford Bridge.

City boss Manuel Pellegrini pledged to play with a scratch side in light of the fifth-round match being moved to Sunday for television coverage, with an eye on Wednesday’s Champions League trip to Dynamo Kiev and a lengthy injury list.

The Chilean stuck to his word as he named five full debutants, although one of those – French striker David Faupala – seemed to care little for his manager’s assertion that the tie was “not a real game” when he promptly cancelled out Diego Costa ‘s 35th-minute opener.

But Chelsea’s class and experience told during the early stages of the second half, with Willian and Gary Cahill scoring in quick succession as the below-par performances of experienced City goalkeeper Willy Caballero and right-back Pablo Zabaleta did little to help the cause of their younger colleagues.

Eden Hazard rifled number four from a free-kick and Oscar  had a penalty saved before fellow substitute Bertrand Traore completed the scoring as Chelsea maintained boss Guus Hiddink’s hopes of lifting the trophy he won in 2009 with a 13th domestic match unbeaten.

Tosin Adarabioyo, Aleix Garcia and Faupala made maiden senior appearances among six teenage starters for City, while a far more seasoned Chelsea were unchanged from their 2-1 midweek defeat at Paris Saint-Germain.

Faupala was the first City rookie to settle, working his way past Cahill and Branislav Ivanovic to draw a near-post save from Thibaut Courtois .

Chelsea quelled their visitors’ early enthusiasm with a crisp passing move that ended with Cesc Fabregas slotting Pedro in behind Martin Demichelis and the former Barcelona winger hitting the post.

Hiddink’s men were dominant and led 10 minutes before half-time when the influential Fabregas lifted a pass over Zabaleta and Hazard hooked the bouncing ball across goal for Costa to head home.

City stunned the home crowd with an instant response – Manu Garcia feeding Faupala, who continued his run to score from Kelechi Iheanacho ‘s return prod across goal as Cesar Azpilicueta failed to clear.

Chelsea continued to have plenty of joy down Zabaleta’s right flank, with Caballero forced into a point-blank save when Hazard picked out Pedro.

Adarabioyo concluded an impressive half with a vital block on Pedro and Pellegrini’s experimental line-up reached the break on terms.

Parity lasted only three minuted of the second half as Willian surged forward on the break and exchanged passes with Hazard to finish clinically across Caballero.

Cahill clattered home a third when Fernando could only block Hazard’s cross into the England defender’s path.

That strike went through Caballero, but the Argentine could not get close to Hazard’s 67th-minute free-kick as he inexplicably shuffled behind his wall and the ball dropped into the opposite corner.

The visiting goalkeeper regained some credit by keeping out a poor penalty from Chelsea substitute Oscar, Demichelis having bundled Traore to ground.

Caballero rounded off his mixed outing by scrambling haplessly to his far post as Traore’s header from Oscar’s cross looped in.

Having written off an FA Cup bid on the back of consecutive Premier League defeats to title rivals Leicester City and Tottenham, Pellegrini must look to revive City’s season in the Ukrainian capital and at next weekend’s League Cup final against Liverpool.

- David Faupala scored on his first ever senior appearance in English football.

- Diego Costa has scored seven goals in his last seven games in all competitions at Stamford Bridge.

- Eden Hazard has scored and assisted in both of his two FA Cup appearances this season (two goals, three assists in total).

- Eden Hazard has assisted two goals in a game (all comps) for Chelsea for the first time since March 2014.

- Chelsea (8) have scored more direct free-kicks than any other team in Europe's top five leagues (all comps).