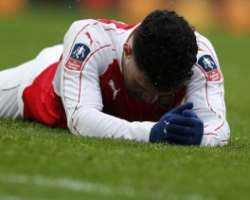 Arsenal’s bid for a third straight FA Cup title was checked by a frustrating 0-0 draw against Hull in the fifth round on Saturday, forcing the teams into yet another meeting in the competition and reigniting the debate over replays.

West Bromwich Albion exited in disgrace, though, losing 3-1 at second-tier Reading before its captain, Chris Brunt, was struck near his eye by a coin thrown by one of his team’s own supporters after the game.

“I was absolutely disgusted and ashamed,” Brunt, sporting a cut under his left eye, said of the incident.

Fielding a weakened team ahead of a Champions League last-16 match against Barcelona on Tuesday, Arsenal created a slew of chances against second-tier Hull but was denied by a mixture of poor finishing and good goalkeeping from Eldin Jakupovic. Arsenal had 24 shots and Jakupovic saved 11 of them, including a tip onto the post from Joel Campbell’s shot.

It is the third straight year that Arsenal and Hull have met in the FA Cup. Arsenal won in the final in 2014 and also in the third round last season on its way to winning the trophy for a record 12th time. They’ll have to play each again now. When, though, is anyone’s guess, with the teams struggling to fit another game into their congested fixture schedules before the quarterfinals are played over the weekend of March 12-13.

Scrapping replays in the FA Cup is among measures being considered to trim the fixture list in English soccer.

“There is nobody more traditionalist than me when it comes to the FA Cup but why can’t we just go to penalties?” said Hull manager Steve Bruce, whose team is seeking a return to the Premier League.

“I like the English formula because it’s a little bit special,” Wenger said. “I like the idea that in England you don’t do things like anywhere else. That’s why you negotiate in Brussels at the moment as well,” Wenger added, referring to Britain’s European Union discussions.

Arsenal is bidding to become the first team since Blackburn in 1886 to win the FA Cup three years in a row.

The post-match incident involving Brunt further soured a disappointing day for West Brom at Madejski Stadium, which looked to be going well when Darren Fletcher put the team in front in the 54th.

Brunt went over to applaud the West Brom fans after the game and was hit by a coin. He went down clutching his face, and then confronted a group of supporters before being led away by stewards and a teammate.

Brunt later spoke to the BBC with a cut under his eye, saying: “They thought it was OK to throw a coin at their own players. I’m disgusted … they paid a lot of money to come, but a small minority spoilt it.”

Ross Barkley’s deflected shot and a close-range finish from Romelu Lukaku, both in the second half, earned Everton a 2-0 victory at Bournemouth, which had a penalty saved in the first half.

Watford advanced by beating second-tier Leeds 1-0, with Scott Wootton prodding the ball into his own net in the second half as he attempted to clear a cross.