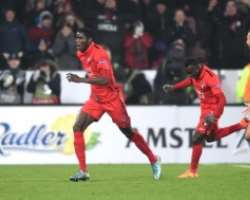 Ebere Paul Onuachu struck the winner as Midtjylland sealed a shock 2-1 victory over Manchester United in the first leg of their Europa League last-32 tie on Thursday.

United were on the back foot before a ball was kicked as David de Gea sustained an injury during the warm-up. His replacement Sergio Romero made a handful of fine saves, but was unable to preserve a result for Louis van Gaal.

Starting in place of Wayne Rooney , Memphis Depay snatched the lead for United but they were pegged back before half-time when Pione Sisto’s deflected shot flew into the bottom corner.

The Premier League side, who were perhaps fortunate not to see young Donald Love sent off, seemed content to sit back in the closing stages and were punished when Onuachu drilled low past Romero from the edge of the box.

United fans had baulked at £71 tickets before the game, but their ire will likely switch back to Van Gaal’s inability to get the best out his team after another sorry show.

Showing no ill-effects of his late call-up to the side, Romero reacted superbly to claw Hansen’s header off the line following a corner as Midtjylland looked to exploit their early set-pieces given United’s makeshift backline, though Chris Smalling wasted a great chance from a Daley Blind corner which he headed across goal and wide