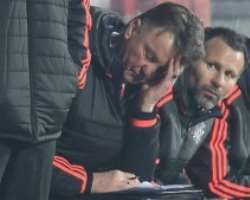 Murphy’s law and missed Jesse Lingard chances were behind Manchester United’s loss to Midtjylland, according to Louis van Gaal.

Memphis Depay put the visitors ahead in Denmark before goals from Pione Sisto and Ebere Paul Onuachu sealed a famous victory for the home side in the first leg of the Europa League last-32 tie.

United lost captain Wayne Rooney to injury before flying out for the game and were dealt another blow when goalkeeper David de Gea picked up a knee problem in the warm-up, meaning Sergio Romero was drafted into the starting line-up as a late replacement.

And, despite conceding his side delivered a poor performance at times, Van Gaal believes United are being plagued by the famous maxim that whatever can go wrong, is going wrong.

“It is the law of Murphy. When you start the game and your goalkeeper is [injury] number 14, you’re not starting like usual,” he said to BT Sport.

“A lot of things are happening in the heads of the players. The first 10 or 15 minutes were not so good but after that we came into the match, scored and could have scored more.

“But then it’s too much. The second half, we don’t win any duels, any second ball. You cannot afford a second goal, but we could have scored also – Jesse Lingard had two remarkable chances. It is the law of Murphy, I think.

“I think that, in certain phases, we were not organised. But that happens when you play with another team every week.

“It is always possible in football but we have the chance to beat them at home and we have to do that.”

Van Gaal confirmed De Gea will face further tests on his injury, but praised the performance of Romero, who made a handful of superb saves despite being beaten by Sisto’s deflected strike and Onuachu’s precise finish.

“He has a knee problem. We have to investigate tomorrow, with a scan or something. We can’t know that now,” he said of De Gea.

“Romero did it [filled in well] also in the beginning of the season. I have enough hope in him. The first goal was deflected – it’s unbelievable that that’s happening.”