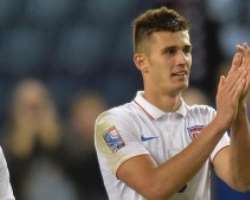 The U.S. center back could make his first appearance on a game-day roster for Chelsea when the Blues face Paris Saint-Germain in the UEFA Champions League on Tuesday.

Matt Miazga ‘s debut on a game-day squad for Chelsea could come in the most pressure-packed of environments.

The 20-year-old U.S. international has traveled with the Blues for their Champions League round of 16 first leg against Paris Saint-Germain on Tuesday.

Miazga has not cracked the 18-man game-day roster since joining Chelsea last month in a transfer from the New York Red Bulls . But with Kurt Zouma out for the season with a knee injury and John Terry sidelined Tuesday because of a hamstring problem, Miazga has made the list of 21 players traveling to Paris.

With three goalkeepers and suspended midfielder Nemanja Matic included in the squad, just one eligible field player will be trimmed from the traveling party when manager Guus Hiddink tabs his 18 players to face PSG.

Miazga remains unlikely to see the field, however, with Gary Cahill and Branislav Ivanovic the presumed starters in central defense.