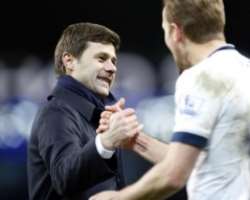 Christian Eriksen celebrated his 24th birthday with the winning goal for Tottenham Hotspur when they beat Manchester City 2-1 at the Etihad Stadium on Sunday to stay second in the Premier League table.

Spurs broke the deadlock in the 53rd minute after referee Mark Clattenburg ruled that City’s Raheem Sterling had handled in the area even though he turned his back as Danny Rose crossed and the ball hardly seemed to hit his arm.

But that did not worry Kane who fired his spot kick down the centre of the goal and past his England team mate Joe Hart into the net.

Yaya Toure almost equalised for the home side when he hit the bar with a 57th minute free kick, but they were soon level when Kelechi Iheanacho swept a cross from Gael Clichy into the roof of the Spurs net.

Eriksen though gave Spurs all three points when he scored in the 83rd minute after a surging run from Erik Lamela.