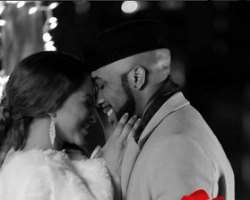 All for the season of love, singer, Banky W, has joined the like of 2Baba, in releasing love songs that will flow along the Valentine season and this time, he brought in lovely Nollywood actress, Adesua Etomi, as a vixen.

The music video 'Made for you' directed by Banky W, will see the singer bringing back that flavor of love songs just the way it should be and fans are anxiously waiting for it to hit download sites.

Adesua, who gave in her best in the video, could not hide her feelings as she thanked Banky W for giving her the opportunity to make her music video debut.

“So I Made My Music Video Debut and it's for The Best Song Ever. I'm Super Excited. This Video Is Fire. Thank You Mr W,” she wrote.