Why it's not going to be easy for Pep Guardiola in Premie League: Hiddinik 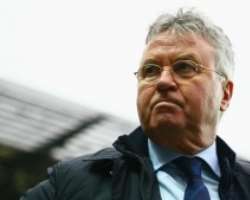 Pep Guardiola will face a tough challenge at Manchester City, according to Guus Hiddink, who is unsure of his own future at Chelsea.

Guus Hiddink has said it’s “up to Chelsea ” whether the club appoints Manuel Pellegrini to replace him and expressed his admiration for the Chilean.

Hiddink joined Chelsea for his second spell as manager in December, replacing Jose Mourinho, and the Premier League champions have been undefeated since his arrival.

However, Hiddink’s contract expires at the end of the season and Pellegrini has confirmed that he is leaving Manchester City and will be a free agent ahead of 2016-17, Pep Guardiola the man set to take charge at the Etihad Stadium.

Hiddink responded to questions over whether Pellegrini would replace him, saying: “That’s up to Chelsea to decide.

“I have not met him or talked to him but I admire the approach of his football and his teams.

“He is a well-balanced manager and I respect him, without having met him.”

Hiddink expects Guardiola to find life in the Premier League more difficult than his trophy-laden spells at Bayern Munich and Barcelona .

The Dutchman said: “It is a very attractive league for the younger managers. To work in this league is beautiful.

“He will face another league to that which he is used to. He has always had domination from the teams he worked with.

“This is a little bit different because there is no specific favourite as there is in Spain with Barcelona and [Real] Madrid, and in Germany where the only one who can be champion is Bayern.”

He added: “But it is not his first year. He is very experienced in his career and he has the Spanish guys who are in Manchester City for many years who know this league.”